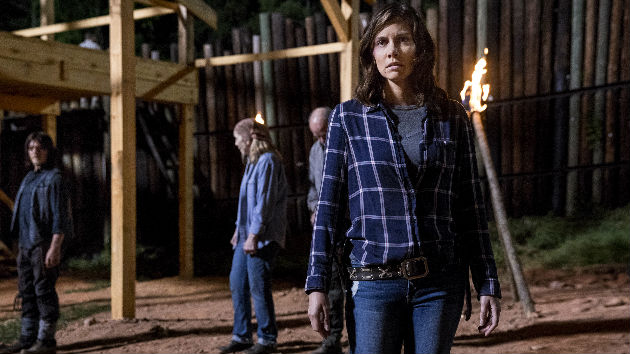 AMC/Jackson Lee Davis(NEW YORK) — (SPOILERS AHEAD) The ninth season of The Walking Dead begins with a sign, "Welcome to Alexandria," and signs of progress: The burned church rebuilt, various projects underway.
Michonne watches as Judith paints a picture of her friends and family left at the compound.
Meanwhile, at the Sanctuary, a less refined community. Dead corn is being made into fuel, Daryl is helping fix motorcycles.
All the survivors have created a series of security rally points to ease travel from Virginia to their destination, Washington D.C. Rick and Michonne scout ahead, dispatching stragglers, ahead of a convoy of their allies on horse drawn carts and other vehicles.
The band work their way into a museum to round up supplies, going room to room. Eventually, Rick, Anne — formally known as the Scavengers' leader Jadis — and Fr. Gabriel find what they were looking for: samples of all kinds of seeds that had been stored there for study, essentially a doomsday vault.
Meanwhile, Carol, Maggie, and Michonne find their prize, an old wagon and farming tools their folks can use as a model to replicate. But they have to lower it over a glass floor that's a ceiling to a veritable aquarium of walkers below. With the floor straining from the weight, Ezekiel falls through the glass. The heroes manage to pull him to safety in time, earning a hug — and, unexpectedly, a kiss, from Carol.
On the road home, on horseback, he proposes to Carol. She turns him down. "Put that thing away, it'll snag on everything," she says of the ring. He laughs, and says he'll keep it for when she's ready.
On the way back, the way is blocked by a downed bridge and a muddy road. Their wagon gets bogged down in the mud as walkers approach, but they free it, leaving Daryl and Michonne to dispatch them. One of the Hilltop youths, Ken, who had been tending to the horses, tries to save a horse from a walker's bite, when he's bit himself, and dies. Maggie tearfully runs his head through to save him from turning.
Back at Hilltop, Maggie tells the kid's parents the bad news. They don't take it well.
Later on there's a funeral for him, and Gregory eulogizes him.
Rick, Daryl, and Michonne roll up to Sanctuary with supplies. While many hail Rick for toppling Negan and bringing peace, there's an undercurrent of subversion. "We are still Negan," somebody scrawled on a wall.

Daryl says he doesn't want to be the de facto leader of Sanctuary anymore, and later, Carol tells her friend she's willing to take over — even though she's happy with Ezekiel.
Back at Hilltop, Gregory continues to work Ken's dad, Earl. He gets him to break his sobriety to sow seeds of doubt in a vote that chose Maggie as a leader, blaming her for Ken's death. "She's the leader," Earl slurs. "She doesn't have to be," Gregory responds.
At Alexandria, in bed with Michonne, she proposes to Rick a charter between the communities.
At Hilltop, Gregory speaks to Maggie, telling her that someone defaced Glenn's grave. It's obviously a trap. She walks over with her baby in a stroller, and she's struck by a hooded man. The baby spills out of the stroller, as the scrap continues. Enid tries to help, and the assailant hits her, and she gets knocked out. Another Hilltopper grabs the assailant, and it's Earl, now drunk thanks to Gregory.
Maggie immediately confronts Gregory. "You want to lead this place and you can't even murder somebody right," she says. Gregory pulls Maggie's knife on her, telling her that he's going to kill her and say it was self defense. She disarms him, and he cowers.
The next morning, Carol stays behind at Sanctuary, leaving Ezekiel with a kiss and a promise to return home to him.
Rick, Michonne, and Daryl return to Hilltop, to find a bruised Maggie, and her thankfully uninjured baby Herschel, who was named after her dad. Rick lobbies her to provide more supplies from her thriving community, as well as manpower to help rebuild a bridge. Maggie is unmoved by the Sanctuary's supply plight. She drives a hard bargain: the Sanctuary gets a handout of food from them in exchange for them providing labor for the bridge building, and all of their fuel. "They surrendered," she says coldly. "We didn't kill them." She adds, "When we were fighting the Saviors…I wasn't someone to follow. That changes now."
At nightfall, Maggie has the townsfolk gathered. Gregory is in the gallows; sitting on a horse, with a noose around his neck, Wild West style. "People need to understand, at Hilltop the punishment has to fit the crime," she says.

With Rick and Michonne watching, aghast, Gregory tries begging for his life like the coward he is, but Maggie gives the signal, and Daryl slaps the horse, letting Gregory hang until his death.
"I made this decision, but this isn't the beginning of something. I don't want to go through with it again."

The Walking Dead returns next Sunday, October 14 at 9 p.m. on AMC.