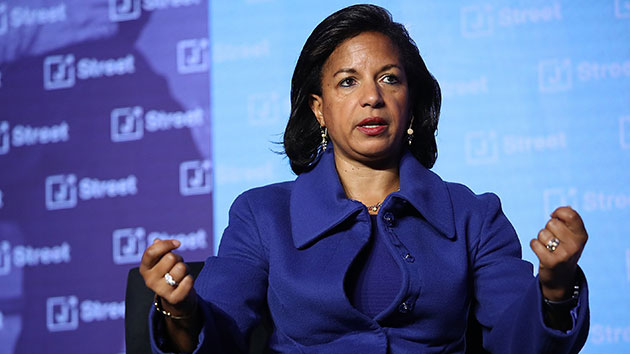 Win McNamee/Getty Images(NEW YORK) — Susan Rice walked back a much-discussed tweet from last week at a panel discussion on Sunday, but said she will give a run against Maine GOP Sen. Susan Collins "due consideration."
Rice, who served as national security adviser under President Barack Obama, opened eyes on Friday when she responded to a question asking if anyone was willing to challenge Collins in the wake of her confirmation vote for Supreme Court nominee Brett Kavanaugh.
Former Obama White House Communications Director Jen Psaki tweeted, "who wants to run for Senate in Maine? there will be an army of supporters with you," to which Rice responded simply, "Me."
Rice spoke at a panel during The New Yorker Festival on Sunday and said she had "to do a lot more homework" before seriously committing to a run.
"I made the tweet, I later elaborated that this wasn’t where my head was," Rice said Sunday. "But I have been moved by the enthusiasm. I’m going to give it due consideration after the midterms."
Collins serves on the Senate Judiciary Committee and has been a critical swing vote while President Donald Trump has been in office. She gave a 45-minute speech on the Senate floor on Friday committing to voting "yes" for Kavanaugh's nomination.
"The Senate confirmation process is not a trial," Collins said Friday. "But certain fundamental legal principles about due process, the presumption of innocence and fairness do bear on my thinking, and I cannot abandon them."
Kavanaugh was accused of sexual assault by Dr. Christine Blasey Ford while the two were in high school in the 1980s. He denied the allegations repeatedly, including in testimony before the committee on Sept. 27.
Collins' support for Kavanaugh, who was confirmed and sworn in as the Supreme Court's newest justice on Saturday, drew protests even before she spoke on Friday.
Before her speech, protesters could be overheard chanting, "Vote no! Show up for Maine women! Vote no! Show up for Maine women!"
Rice was born and raised in Washington, D.C., but has had a house in Maine for 20 years, she said.
Her comments at The New Yorker Festival seemed to indicate that other viable candidate might exist in the state. Collins is up for re-election in 2020.
"It’s a complicated political environment. There are lots of good Democrats in the state of Maine," Rice told the audience at the SVA Theater in New York City. "My husband was surprised to see my tweet."
Ironically, it was Collins who introduced Rice at her confirmation hearing for U.S. ambassador to the United Nations in 2009 — the position she filled before becoming national security adviser.
Collins dismissed concern over a challenge by Rice on CNN's "State of the Union" on Sunday, prior to Rice's comments at the festival, saying, "Her family has a home in Maine, but she doesn't live in the state of Maine. Everybody knows that."
Copyright © 2018, ABC Radio. All rights reserved.