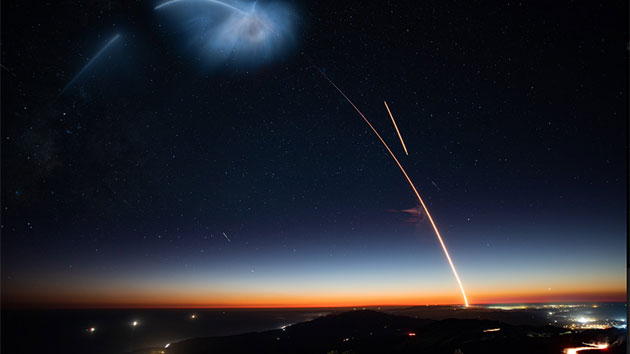 SpaceX Twitter(SANTA BARBARA COUNTY, Calif.) — SpaceX lit up the night sky in Southern California on Sunday, and sent gawkers from across the region craning their necks to the sight.
Officially, the rocket company owned by Elon Musk was launching its Falcon 9 rocket into space to deliver SAOCOM 1A, an Argentine satellite, into orbit. The launch marked the 30th successful landing of a rocket booster, according to the company. It was also the first West Coast landing of an orbital class rocket booster on land, SpaceX said.
But unofficially, it just looked really darn cool.
The launch sent a red-orange streak across the sky in the area of its launch from Vandenberg Air Force Base in Santa Barbara County before boosters sent white and yellow pulsating beams of light into the black night sky.
The rocket lifted off at about 7:21 p.m. local time, and landed about 12 minutes later after delivering its package to orbit.
Social media immediately lit up with photos of the launch. SpaceX got in on the action themselves, sharing four photos of the dazzling light display.
While Musk has dealt with a host of setbacks with his car company, Tesla, including a $20 million settlement with the Securities and Exchange Commission (SEC), and in his personal life, including a libel lawsuit, but SpaceX has been relatively unscathed.
The company made headlines last month when Musk held a press conference to announce the first "space tourist" — a Japanese billionaire who will be launched around the moon on the company's Big Falcon Rocket in 2023.
Earlier this year, on Feb. 6, the Falcon Heavy rocket successfully launched from Kennedy Space Center in Florida, launching a red Tesla Roadster driven by a Starman mannequin.
SpaceX caused a bit of concern in December 2017 when they launched a similar rocket from Vandenberg Air Force Base. Residents of Southern California were unsure of what the bright light shooting across the sky was at the time.
Panic was kept to a minimum this time as observers mostly just enjoyed the sight. The Air Force advised residents of the launch on Sunday last week.