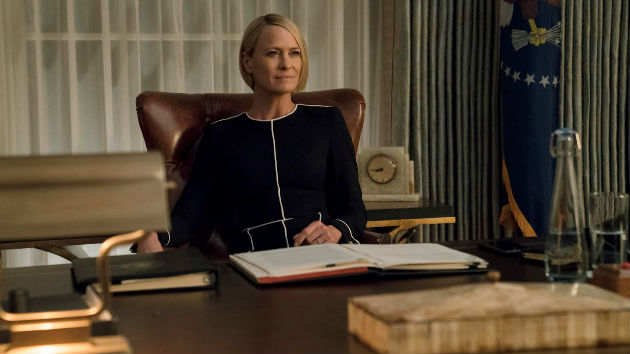 Courtesy Netflix(HOLLYWOOD) — The U.S. hasn't had a female president, but if we did, she might go through what Claire Underwood goes through in the trailer for the new season of Netflix's House of Cards.

In the two-minutes-plus trailer, Robin Wright's Claire, who's taken over running the country from her husband, Kevin Spacey's President Frank Underwood, is seemingly analyzed, belittled, threatened, criticized and bashed by everyone, including the media, religious figures, White House denizens and her own staff. But she's not having it.

"I'm not going to be told what to do anymore, Doug — not by you or any man, ever again," a defiant Claire says to Michael Kelly's Doug Stamper.

House of Cards returns November 2. This will be the final season of the acclaimed series, following the ouster of Kevin Spacey in the wake of allegations of sexual misconduct. We know his character is dead, but we don't yet know how he kicked the bucket.