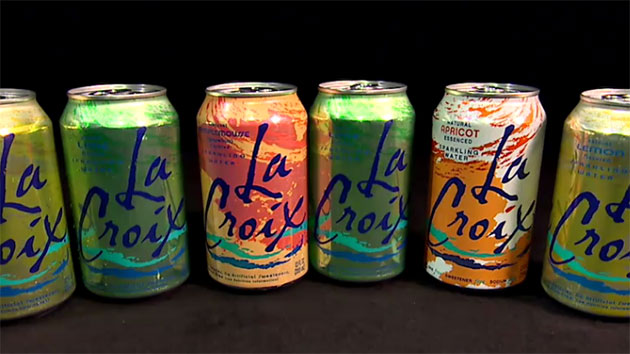 ABC News(COOK COUNTY, Ill.) — The makers of the wildly popular sparkling water LaCroix, which has become a phenomenon over the past year, were hit with a lawsuit alleging the beverage contains "non-natural flavorings," including an ingredient said to be used as a "cockroach insecticide."
The lawsuit, which is seeking class action status, was filed in Cook County, Illinois, against the drink's parent company, National Beverage Corporation, and slammed what it said was the "practice of mislabeling their signature product, LaCroix Water, as 'all-natural,'" according to court documents obtained by ABC News.
The beverage makers "mislead consumers into believing that their product is natural when it is not," the complaint added. Moreover, the suit alleged the bubbly water contains the ingredient "linalool" which it says "is used as a cockroach insecticide."
The National Beverage Corp. "categorically denies all allegations" in the suit, the company said in a statement, slamming it as "without basis in fact or law regarding the natural composition" of LaCroix sparkling waters.
"Natural flavors in LaCroix are derived from the natural essence oils from the named fruit used in each of the flavors," the statement added. "The lawsuit provides no support for its false statements about LaCroix’s ingredients."
Legal expert Areva Martin told Good Morning America, that if the suit's "claims are substantiated, this could have a dire effect on the company."
"It may be forced to change it's labeling, we know the company prides itself on providing a natural and organic water, so if they have to change that labeling, that can change their entire marketing strategy," she added.
But experts say that even if the allegations are true, consumers shouldn't jump to conclusions about the bubbly beverage, saying LaCroix would have to contain 50 percent of the linalool in order to pose a health risk, and that the natural chemical is often found in fruits and spices such as cinnamon.
"The consumer should not be alarmed by this lawsuit," Roger Clemens, a food safety expert from the University of Southern California, told GMA. "The compounds under discussion occur naturally and citrus beverages like orange juice, lime juice."

After brain-eating amoeba found in county’s water supply, advisory lifted in all but 1 area
Two vehicles hit protesters in LA as Breonna Taylor protests continue throughout US
Two more former paperboys come forward to allege sexual abuse by supervisor: Lawsuit
Mary Trump alleges in lawsuit her family ‘fleeced’ her out of millions of dollars
Protesters hit by vehicles at Breonna Taylor demonstrations in Buffalo, Denver
Facebook hit with lawsuit over Kenosha protest deaths