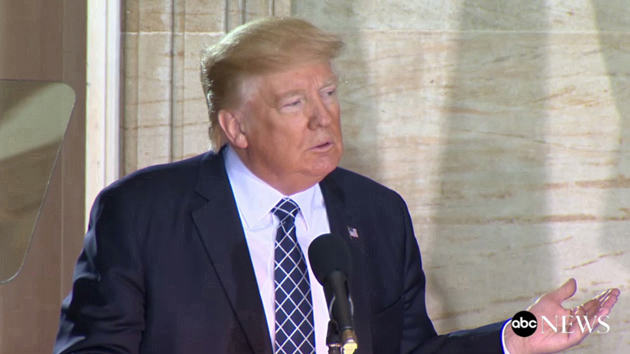 ABCNews.com(ORLANDO, Fla.) — The controversy over the sexual assault allegations against incoming Supreme Court Justice Brett Kavanaugh constituted a "disgraceful situation, brought about by people that are evil," President Donald Trump stated Monday as he celebrated his party's success in confirming the judge during a speech to law enforcement officials in Florida.
"He's a great person and it was very, very unfair what happened to him," Trump said during remarks to the International Association of Chiefs of Police's annual convention. "False charges. False accusations. Horrible statements that were totally untrue that he knew nothing about."
"It was a disgraceful situation, brought about people that are evil," the president added, though it was unclear whether he was referring to Kavanaugh's accusers, Senate Democrats opposing his confirmation, or other unnamed individuals.
Trump has previously delivered mixed messages about Christine Blasey Ford, the woman who appeared before the Senate Judiciary Committee to detail her claims that she was sexually assaulted by Kavanaugh when they were teenagers. Kavanaugh has denied the allegation.
The day following Ford's appearance, the president said he believed her testimony "was very compelling" and that she was a "very credible witness."
But days later, during a campaign rally in Mississippi, Trump mocked Ford, eliciting laughter from his audience as he mimicked her inability to remember additional details from the evening of the alleged incident.
"'I don’t know. I don’t know. Upstairs? Downstairs? Where was it? I don’t know. But I had one beer. That’s the only thing I remember,’" Trump said at the event, impersonating Ford.
The president additionally lauded efforts by both Kavanaugh and Senate Republicans to keep working towards the confirmation process amid the controversy, claiming that "a lot of people would've said, 'let's give it up, let's go a different direction.'"
"We all toughed it out together and I have to thank the Republican senators that fought so hard for this because it wasn't easy," Trump said. "And it was a great honor to be involved in the situation."
Trump will have an additional opportunity to celebrate the confirmation Monday evening when he and Kavanaugh participate in a ceremonial swearing-in ceremony at the White House at 7:00 p.m.
Kavanaugh was officially sworn in Saturday night following the 50-48 vote in which he was confirmed by the Senate. Chief Justice John Roberts and retired Associate Justice Anthony Kennedy, whose seat Kavanaugh is inheriting, delivered the oath to the judge.