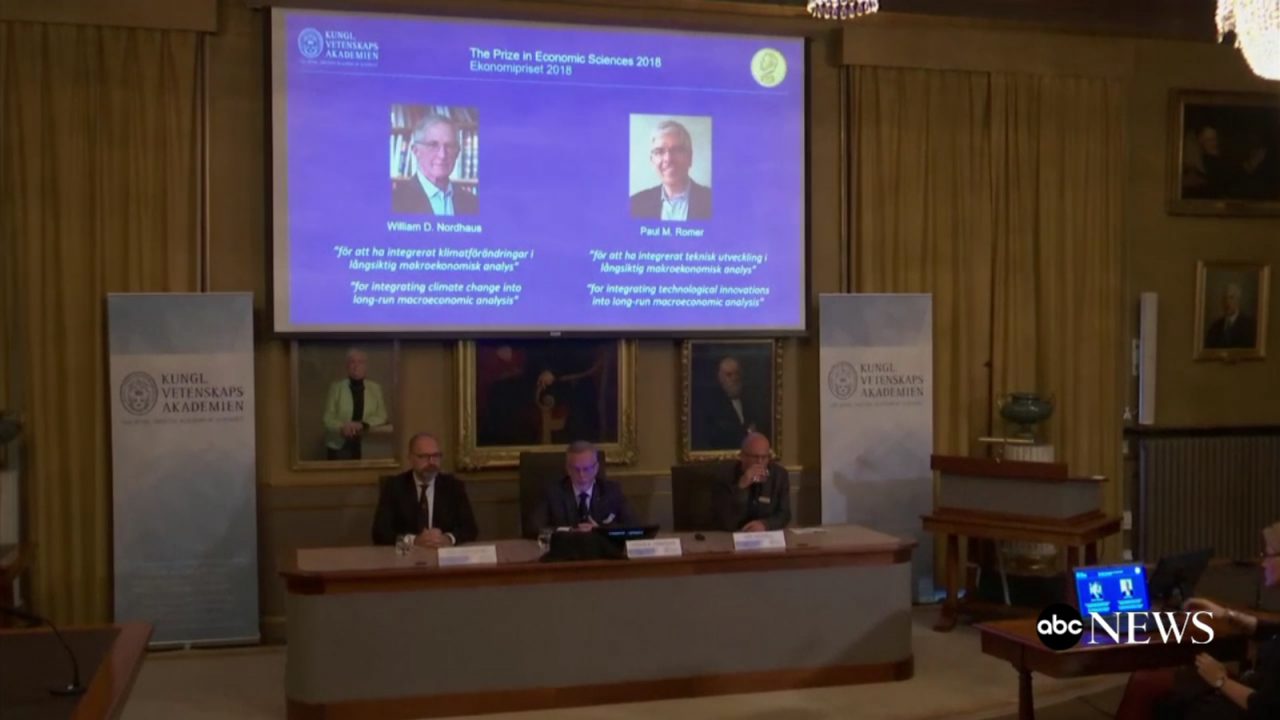 Swedish Royal Academy of Sciences(NEW YORK) — When the Swedish Royal Academy of Sciences called New York University professor Paul Romer early this morning to inform him that he was co-recipient of this year's Nobel Prize in Economics, the veteran professor let the call go to voicemail, thinking that only a telemarketing call could be coming in at such an early hour.
“I didn't answer the phone because I've been getting so many spam calls," Romer told ABC News. "I just assumed it was more spam."
Then the phone rang again, and he let it go to voicemail again.
It's not that Romer is unfamiliar with the Nobel awards season — he's been shortlisted for the economics award, known officially as the Sveriges Riksbank Prize in Economic Sciences in Memory of Alfred Nobel, in years past.
He just thought the prizes were awarded next week, not this week, he said.
The world-renowned economist lay in bed thinking how odd it was to get two successive phone calls so early. He tried to fall back asleep, he said.
“But I couldn't get back to sleep so I went to go check and see if it was from one of my kids or something," he said.
He said he recognized the number as coming from Sweden.
"So, I thought, I better call back.”
When Romer called the number back, he was told to hold the line to talk to the committee.
While holding the line, Romer said, he assumed the committee was doing some last minute background work on a lucky colleague.
“I was thinking it was next week, so I thought this might have been part of some of due diligence for somebody else or something,” Romer said.
He jokingly described a tell that often gives away aspiring Nobel Prize recipients in his field to their colleagues each fall around this time of year.
“They’ve got a new haircut because they're kind of hoping [to win],” Romer said. “So you'll see if you look at the pictures I haven't had a haircut yet.”
“I never thought I would win the prize," he said.
Romer may not have expected to win the prestigious award, but his school sure hoped so. In an accidentally-released draft press release in October, 2016, NYU announced that the economics professor had won the prize, when, in fact, he hadn't.
At least not yet.
Today, Romer was awarded the Nobel Prize ‘for integrating technological innovations into long-run macroeconomic analysis.’
“Romer demonstrates how knowledge can function as a driver of long-term economic growth,” The Royal Swedish Academy of Sciences said in a statement. “When annual economic growth of a few per cent accumulates over decades, it transforms people’s lives.”
He shared the prize with Yale University economics professor William D. Nordhaus, who was honored for his work in assessing the economic impact of climate change.
There was no immediate word on whether Nordhaus picked up the phone on the first call to hear the good news.
“It's not something to try for because the people who really try for it end up feeling bitter, you know, every year when they don't get it,” Romer said.
“I never thought I'd get it," he continued — the news of his achievement still only a few hours old. "I never hoped for it. And I became an economist just because I love learning. I love ideas and I'm trying to do something that could make a difference.”
Romer, who will turn 63 in November, said he is not planning to retire anytime soon.
Ask what he would do with the prize, Romer responded without hesitation that he would spend some of to get more work space.
“My server or my website apparently got overloaded so maybe I need to pay for a slightly bigger server in the cloud.”
Sweden’s central bank established the Prize in Economic Sciences in Memory of Alfred Nobel, founder of the Nobel Prize in 1968.