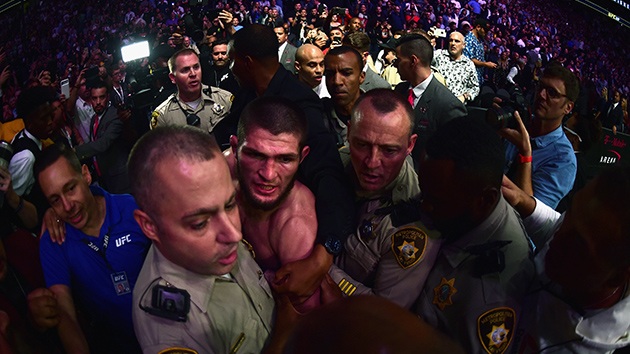 Harry How/Getty Images(LAS VEGAS) — The fight outside the cage at UFC 229 will end up getting a lot more attention than the fight inside the ring.
Khabib Nurmagomedov tapped out UFC star Conor McGregor, who was making his return to the Octagon after an interlude in boxing, with a rear naked choke in the fourth round to defend the lightweight title. He is now 27-0 in his career and 11-0 in the UFC.
But then the show went south.
Nurmagomedov, a 30-year-old from Russia, danced around the ring following the victory, and then hurled his mouthpiece in the direction of McGregor's trainers outside the cage. He then scaled the fence and attacked people from McGregor's entourage sitting cageside at the T-Mobile Arena in Paradise, Nevada, outside Las Vegas. Security officials and UFC personnel immediately jumped into the fray to try to separate Nurmagomedov from McGregor's camp. Several police officers managed to cordon off Nurmagomedov and pull him away from the brawl.
ESPN reported Nurmagomedov exchanged punches in the crowd with Dillon Danis, a fighter who trains with McGregor, after hearing trash talk from the group.
While Nurmagomedov was outside the ring, people from the Russian fighter's group rushed into the cage and started brawling with McGregor, who was prevented from climbing over the cage by officials.
UFC President Dana White told ESPN the Nevada State Athletic Commission is holding Nurmagomedov's check, but paid McGregor. White also said they were turning over film to the commission.
White said three members of Nurmagomedov's camp were arrested following the incident. In a press conference following the fight, White said McGregor refused to press charges and the men were released.
White was asked about possible punishments, to which he responded, "could be suspension — these guys need visas again to get back in the country. Big fines. It's a big deal." He called it "a very bad night" for the UFC.
"Nobody's ever done that, nobody should ever do that," White said of Nurmagomedov jumping into the crowd, a moment reminiscent of the November 2004 brawl at the Palace of Auburn Hills in Auburn, Michigan, between the NBA's Pistons and Pacers.
White told ESPN he had spoken to McGregor in the locker room following the fight.
"He said, 'I don't care about all of this.' Obviously he's upset about losing the fight," White said.
Nurmagomedov made a very short appearance at a press conference following the event, almost three hours after the fight ended. He did not take questions, but did apologize to the city and fans.
"Why people still talking about this?" he said. "My father teach me respect. … This is a respect sport, not a trash talking sport."
The two fighters have a violent history already marred by criminal proceedings.
A warrant was put out for McGregor's arrest after a wild scene at the Barclays Center in Brooklyn on April 5. The 30-year-old champion tried to confront Nurmagomedov at a press event, and hurled a metal gate at the bus the fighter was in. The window was shattered and several fighters inside, though not Nurmagomedov, were injured.
McGregor surrendered to police in June and was charged with three counts of assault, criminal mischief, menacing and reckless endangerment. He pleaded guilty and was ordered to perform community service and attend anger management classes.
The fight on Saturday was McGregor's first since November 2016. In the interim he fought Floyd Mayweather in a much-hyped boxing match, which he lost.