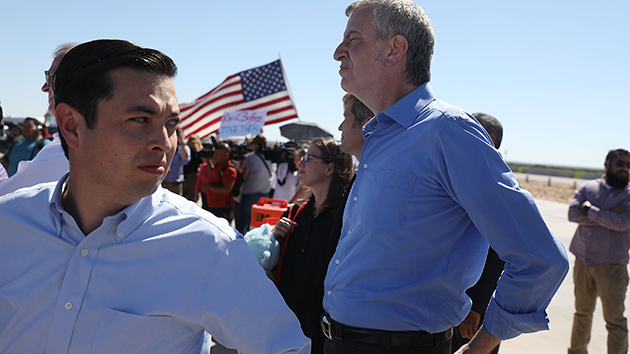 Joe Raedle/Getty Images(NEW YORK) — New York City Mayor Bill de Blasio was confronted during his gym workout by activists pushing for more housing for the homeless, prompting him to leave as he said, “I’m not doing this here. I’m in the middle of a workout.”
The mayor’s dismissiveness toward the advocate quickly made headlines, particularly in light of the fact that de Blasio, a former activist himself, ran for mayor on a progressive platform promising to address homelessness and inequality in the city.
A video posted to YouTube shows homeless activist Nathylin Flowers Adesegun, 72, walking up to de Blasio on Friday as he sat on a mat at a Brooklyn YMCA where he often works out in the morning.
“Out of the 300,000 units in your affordable housing program, only 5 percent will go to housing the homeless,” said Flowers Adesegun.
De Blasio shook her hand, then said, “I’m in the middle of doing my workout. Sorry, I can’t do this now.”
Moments later, he got up to walk away with his bodyguard stepping between him and Flowers Adesegun. “I’m not doing this here," the mayor said, as advocates shouted after him.
“Why won’t you commit more housing to homeless New Yorkers?” activists shouted. “Five percent is not adequate for homeless new Yorkers.” “We need housing for homeless New Yorkers!”
The encounter was videotaped by the activist group Vocal-NY of which Flowers Adesegun is a member.
“I am 72 years old and have been homeless for three years, but he made it clear that his morning workout was more important to him,” Flowers Adesegun said of the mayor in a statement posted on Twitter by Vocal-NY. “We’re not asking for much: Commit 30,000 units of your housing plan for homeless New Yorkers. Every time we ask him to do more for homeless New Yorkers, he changes the subject to prevention and the economy – but am I just supposed to stay homeless?”
The mayor's spokesman said a gym is not the right venue for such discussions.
“People working out at the gym shouldn’t be worried they will be recorded in highly publicized, videotaped political confrontations every morning,” mayoral spokesperson Eric Phillips told The New York Times. “It’s not the right venue for these discussions and the mayor won’t have them there.”
The mayor’s office did not immediately reply to ABC News for a request for comment.
The housing campaign coordinator for Vocal-NY said de Blasio's office reached out after the encounter at the YMCA, and the group hopes to meet with his representatives soon. Homeless advocacy groups also plan to march on Gracie Mansion, the mayor’s residence, later this month.
De Blasio’s affordable housing plan aims for 300,000 units of affordable housing, but advocacy groups say not enough is being done to address homelessness and have asked that 10 percent of those units be set aside for the homeless.
“We’ve asked the mayor … 'Will you do this? Will you dedicate 10 percent?' And he’s flat out said no,” said Giselle Routhier, policy director for the Coalition for the Homeless told ABC News. “What we’re really trying to highlight here is this goes against this progressive values. He’s failed on this.”
There are over 62,000 homeless people in New York City, according to the Coalition for the Homeless, which also said that the homeless rate in the city has reached levels not seen since the Great Depression.
Copyright © 2018, ABC Radio. All rights reserved.