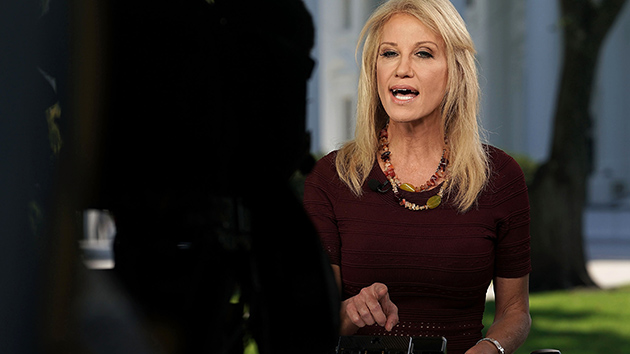 Alex Wong/Getty Images(NEW YORK) — President Trump's counselor Kellyanne Conway said the Brett Kavanaugh confirmation battle showed that many in the media “ want every woman to be a victim … every man … a perpetrator” of sexual misconduct.
“Let's stop pretending that there's moral authority by some including many in your industry," Conway said to ABC News Chief White House Correspondent Jonathan Karl on "This Week" Sunday. "I didn't say you, but many in your industry have lost their moral authority to pretend that they were looking for the truth, that they were on some kind of factfinding mission” regarding the sexual assault and sexual misconduct allegations against Kavanaugh.
“They're not even covering his testimony that he has denied under oath that this has happened,” Conway said. “They want every woman to be a victim, every woman to lock arms with every other woman. Every man is a perpetrator.”
Kavanaugh was sworn in as a Supreme Court justice late Saturday after a tense 50-to-48 vote on the Senate floor that was repeatedly interrupted by protesters shouting in the gallery against senators voting to confirm him.
His nomination was rocked by decades-old sexual misconduct allegations against him. Christine Blasey Ford alleged he sexually assaulted her at a small house party when they were both teens. A former Yale University classmate of Kavanaugh's alleged he exposed himself to her at a college party where there was drinking.
Kavanaugh strongly and categorically denied all accusations of sexual misconduct.
Copyright © 2018, ABC Radio. All rights reserved.