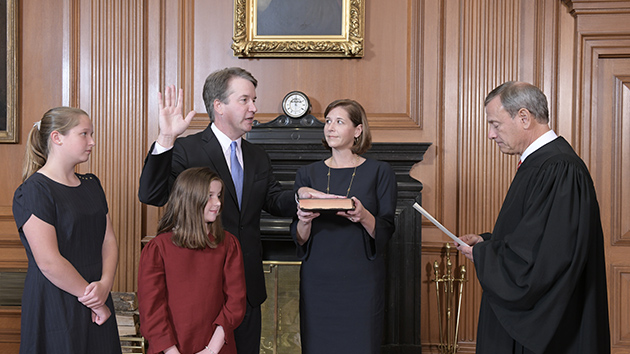 Fred Schilling/Supreme Court of the United States via Getty Images
Posted on October 7, 2018 by ABC News

Fred Schilling/Supreme Court of the United States via Getty Images(WASHINGTON) — One of the three women to accuse U.S. Supreme Court Justice Brett Kavanaugh of sexual misconduct said she is "disgusted and appalled" over criticism she has received from politicians and the media since coming forward with her story.
Washington, D.C., resident Julie Swetnick, claimed in a sworn declaration released by her attorney, Michael Avenatti, that she witnessed a drunken Kavanaugh engaging in "highly inappropriate conduct" that included "fondling and grabbing of girls without their consent" during numerous house parties in the 1980s when Kavanaugh was in high school.
On Saturday, Swetnick released a statement through Avenatti, saying she has been "re-victimized" since coming forward with her story by "certain media 'pundits'" and politicians who have stated that she should have remained silent ahead of the confirmation hearing at which Kavanaugh and another accuser, Christine Blasey Ford, testified.
"They claim my allegations were 'not helpful to the process,'" Swetnick said. "This is outrageous and shows a complete lack of empathy for survivors. I had every right to come forward and I literally placed my life in jeopardy to do so."
Swetnick's statement comes a day after Kavanaugh was sworn in as a Supreme Court justice after a contentious confirmation process. In addition to Ford and Swetnick, another woman, Deborah Ramirez, accused the judge of sexual misconduct when he was in high school and college.
Ford, a college professor from California, accused Kavanaugh of trying to rape her when they were teenagers in the 1980s. And Ramirez, who accused Kavanaugh and a former Yale University classmate of his of sexual misconduct, told The New Yorker that he exposed himself to her at a party and "thrust his penis in her face," causing her to "touch it without her consent as she pushed him away."
Kavanaugh has denied all of the allegations.
Swetnick says she stands by everything she stated in the sworn declaration but stated that the FBI "refused to interview" her and other corroborating witnesses, claiming that it was because President Donald Trump and some Republican senators "never really wanted to get to the truth."
"They could not be bothered to take one hour or even 10 minutes to hear about what happened to us and what we witnessed," Swetnick said of the FBI.
Swetnick also blasted the "audacity" of Republicans for claiming that her accusations were not credible despite not allowing "any investigation to determine their credibility."
"How can they say the claims were not credible when they made no effort to discover whether they were or not?" Swetnick asked.
Swetnick blasted Maine Sen. Susan Collins for calling the allegations outlandish on the Senate floor Friday, despite telling the Portland Press Herald the Monday before that she wanted the FBI investigation to specifically look into Swetnick's claims.
"How would she know?" Swetnick said. "She never did anything to find out. Be clear – Susan Collins does not deserve to represent women in the United States Senate."
Swetnick wrote that "every American should be outraged" about how she and others who came forward were "treated and shamed."
"And remember – next time it might be your spouse, your daughter, your mother, your friend or your sister. Would you want her to be treated the same way?"
Copyright © 2018, ABC Radio. All rights reserved.

Eddie Murphy, Arsenio Hall, and cast share their ideas for a third installment of ‘Coming to America’
‘Tenet’ finally coming to theaters in New York City
Thinx’s new underwear line coming to Target and CVS
Eddie Murphy shares the hilarious “original script” ideas for ‘Coming 2 America’
‘Frasier’ reboot and more coming to Paramount+
A third stimulus check could be coming. Here’s what Americans did with the others