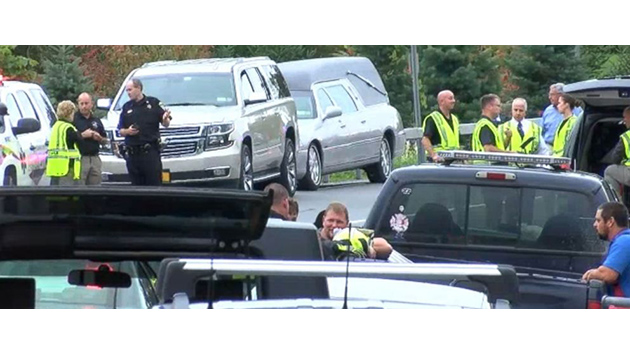 WTEN(SCHOHARIE, N.Y.) — The crash occurred just before 2 p.m. Saturday, at the intersection of State Route 30 and State Route 30A, police said.

Chris Fiore, first deputy superintendent of the New York State Police, said the limousine, which was headed southwest on State Route 30, failed to stop at the intersection. The speed limit on that road is 50 mph, but it was not immediately clear how fast the Excursion was going, Fiori said.

The limo went through the intersection and crashed into the parked Highlander in the lot of an Apple Barrel Country Store and Cafe.

"There was a horrific accident in front of our business today," the company posted on its Facebook page Saturday.

"Our hearts and prayers go out to everyone that was affected by the events of today," the company added.

The NTSB and the State Police will conduct separate investigations but will work together, Sumwalt and Fiore said at a news conference Sunday afternoon.

"We look at everything," said Sumwalt of the upcoming investigation. "We cast a very broad net to see what's out there. We conduct very thorough investigations."

Earlier in the day, the NTSB tweeted that it was sending a "go-team" to investigate.

Its lead investigator on the scene will be Pete Kotowski, and the team will be there about five days, Sumwalt said.

In response to a reporter's question about a toxicology test on the driver, Fiore said part of the investigation will be an autopsy on the driver.

Also part of the probe will be whether the driver and the passengers were wearing seatbelts. Fiore said, according to New York State law, the driver and passengers in the front seat are required to wear seatbelts, while occupants in the back are not.

New York Gov. Andrew Cuomo said his "heart breaks" for the victims, adding that he's directed state agencies to help with the investigation.

"I join all New Yorkers in mourning these deaths and share in the unspeakable sorrow experienced by their families and loved ones during this extremely difficult time," he said in a statement.