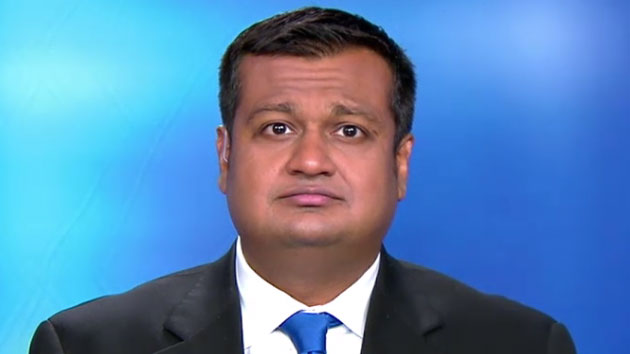 ABC News(WASHINGTON) — A White House spokesman defended the "emotional" Senate testimony of Brett Kavanaugh, who is poised to be confirmed Saturday to the Supreme Court, saying the nominee will be a fair and evenhanded justice.
“I don't think one can hold against Judge Kavanaugh for being emotional in his testimony last week given what he's had to deal with, what he and his family have had to deal with,” White House deputy press secretary Raj Shah said Saturday on Good Morning America, referring to allegations of sexual assault and sexual misconduct against the nominee.

“But if you look at his actual record over 12 years, and he talked about it in this recent op-ed with The Wall Street Journal, in which he is committed to being a fair, impartial and evenhanded justice on the Supreme Court,” Shah said.

Kavanaugh's at times combative testimony before the Senate Judiciary Committee last week raised questions among some observers about his judicial temperament. In the op-ed on Thursday, he said his "sharp" tone was because he was speaking as "a son, husband and dad."
"I was very emotional last Thursday, more so than I have ever been. I might have been too emotional at times. I know that my tone was sharp, and I said a few things I should not have said. I hope everyone can understand that I was there as a son, husband and dad,” Kavanaugh wrote.
Kavanaugh is expected to be narrowly confirmed to the Supreme Court along partisan lines with the exception of one Democrat, Joe Manchin of West Virginia, who — facing a tough re-election battle — announced he will support the president's pick. Only one Republican, Lisa Murkowski of Alaska, has said she will break with her party and not vote to confirm Kavanaugh.
Shah on Saturday continued the White House's defense of the president's references to Kavanaugh accuser Christine Blasey Ford at a rally last week, saying Trump was not mocking her but stating facts about the gaps in her memory of the alleged assault.
“You can disagree with his tone, but can you disagree with the substance?” Shah said. “And I think that the key here is that what he was pointing to are facts. He was stating facts.”
Shah said the president, who previously called Blasey Ford a “credible” witness, found the accuser’s testimony to be sincere but that she lacked corroborating evidence to meet the 'more likely than not' standard.
Copyright © 2018, ABC Radio. All rights reserved.