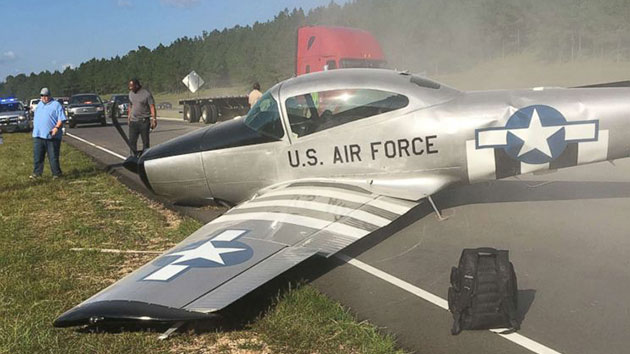 Clarke County Sheriff Todd Kemp(MERIDIAN, Miss.) — Highway 45 in Mississippi became a landing strip for one pilot on Friday afternoon as he set down his vintage plane right on the road after it experienced engine difficulties. Miraculously, the pilot walked away completely unharmed and no one on the ground was injured either.
The plane landed on the northbound side of the highway at about 3:15 p.m. local time. The plane had left Meridian Aviation's Key Field and was headed toward Gulf Shores, Alabama, for a weekend getaway, the pilot said.
"Happy to be here. Happy to be in one piece," pilot Boyd Williams told Meridian, Mississippi, ABC affiliate WTOK-TV. "Thankful nobody on the road was hurt. Thankful that both of my children came here and we're sharing another day together."
Williams could be seen hugging his children on video filmed by local Facebook news group Clarke County Hot Topics.
"All we know is that the pilot had engine problems," Clarke County Sheriff Todd Kemp told Clarke County Hot Topics. "He left Key Field a little bit ago, fuel tanks were full, he had acquired some type of engine problem while in the air, and he had to set it down here on the highway. He was trying to get into the main roadway, but I think he had some difficulty and he had to get on the shoulder, and it tore the landing gear out from under the plane. He's very lucky we didn't have any other major incident here. Glad he wasn't hurt."
Copyright © 2018, ABC Radio. All rights reserved.