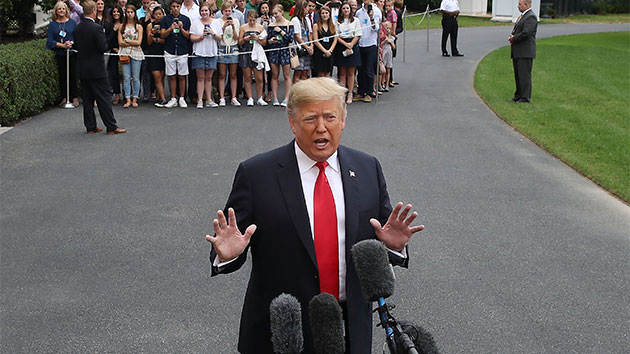 Mark Wilson/Getty Images(WASHINGTON) — President Donald Trump will appear for a campaign rally in Topeka Saturday after the Senate voted to confirm Judge Brett Kavanaugh to the Supreme Court.

Trump supporters, who waited for hours to enter the Kansas Expocentre for the president’s campaign rally just weeks before the midterm elections, broke into cheers when the vote was called in Washington, D.C., chanting “Kavanaugh!” over the opera music of Italian tenor Andrea Bocelli playing on the arena sound system.

Trump reveled in the victory on Air Force One after the vote.

"We’re very happy about it. Great decision. I very much appreciate those 50 votes, and I think he’s going to go down as a totally brilliant Supreme Court Justice for many years, many years," he said to reporters traveling on Air Force One.

Kavanaugh, who was confirmed by a razor-thin margin in a 50-48 vote, battled several allegations of sexual assault that emerged after his nomination, including from Christine Blasey Ford. The college professor told the Senate Judiciary Committee she was “100 percent” certain that Kavanaugh tried to sexually assault her at a high school party in 1982.

Kavanaugh denied the charges in his own testimony before the committee.

Trump, who mocked Ford's testimony at a rally in Mississippi on Tuesday, said he believed his comments "had a great impact" on the confirmation.

Teresa McGuire, 59, a rally attendee from Lawrence, Kansas, said "more should come forward if something happened to them" following the fight over Kavanaugh's nomination, but said she was skeptical of Ford's claims.

"I think it’s unfair to people who have actually been abused, raped and molested, for her to come forward and say that she was when maybe she wasn’t, and all those people that have, it’s just a mockery," she said. "Something might have happened to her, yes, and I pray it didn’t."

Republican and Democratic strategists expect Kavanaugh’s nomination to galvanize their voters ahead of the midterm elections.

Democrats are favored to win back the House and are competing in dozens of congressional districts, including two in Kansas, in their effort to flip at least 23 seats for the majority.

Steve Watkins, the Republican nominee in Kansas’s second district, was on hand for the rally. He is accused of embellishing his biography, according to the Kansas City Star.

Rep. Kevin Yoder, R-Kansas, planned to skip the event because of a previous commitment in his district, according to his campaign manager, CJ Grover. Democrats consider Yoder one of the most endangered Republicans in the House, and see a prime pickup opportunity in his suburban Kansas City district.