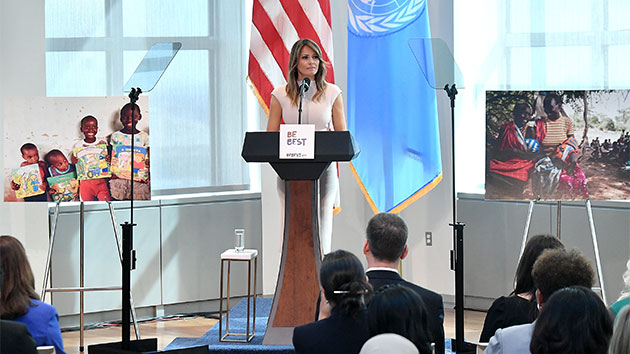 Michael Loccisano/Getty Images(WASHINGTON) — Melania Trump concluded her first major, solo international trip as first lady by saying her four-country tour of Africa was meant to send a message that "we care."

The trip to Ghana, Malawi, Kenya, and Egypt thrust the characteristically private first lady into the global spotlight and out of the glare bearing down on Washington amid a bitter and contentious Supreme Court confirmation battle over Brett Kavanaugh.

Her trip stood as a bright spot in the Trump administration’s relations with Africa, which has been dampened by the president’s past disparaging remarks about some African nations.

She also said none of her hosts brought up the disparaging comments that have been attributed to the president, adding that she never heard him say the remarks.

President Trump in a meeting with lawmakers in January grew frustrated at a proposed bipartisan immigration plan and asked those in the room why they would want people from Haiti, Africa and other "s—hole countries" coming into the United States, according to multiple sources either briefed on or familiar with the discussion.

The first lady said on the last day of her travels in Africa that it had been "incredible" and "unforgettable."

The trip was largely focused on children in keeping with Melania Trump's “Be Best” initiative, and it sought to highlight the positive impact of U.S. aid on the continent, another point of contrast to the president, who has proposed cutting U.S. aid by more than 30 percent.

Congress has rejected that proposal.

The first lady offered praise for what she described as “successful” programs by USAID, the U.S. Agency for International Development, that she observed during her trip.

But she demurred when asked if she would push the president to increase funding to the foreign aid agency.

“We are having funding, so we are helping the countries, and we are working hard for helping them and we will continue to help,” she said.

The first leg of Trump’s trip brought her to Ghana, where she visited with mothers and children in a hospital and laid a wreath at the "door of no return" in Cape Coast Castle – the last place many kidnapped Africans saw before they were crammed onto ships and sent to the Americas for a life of bondage.

She also visited Obama Hall, named for the 44th president after he visited the continent in 2009 with his family.

A photo of the Melania Trump cuddling a baby boy during her visit to a hospital in Ghana went viral in the United States, offering a diversion from an otherwise intense domestic news cycle.

The first lady then traveled to Malawi, where she visited a primary school in Lilongwe that benefits from USAID’s literacy program. She was greeted by a choir of singing students upon her arrival at the school, where she interacted with the children and donated school supplies.

She reciprocated with thanks, saying she and her husband appreciate their support.

“Thank you for having me here and thank you for a beautiful warm welcome,” she said at the school in Malawi, “I wanted to be here to see the successful programs that the United States is providing to the children. And thank you for educating them to 'Be Best' – be their best and to grow up into educated adults for generations to come."

Melania Trump then traveled to Nairobi, Kenya. There, she fed baby elephants – one of which playfully but forcefully nudged her — and went on a safari.

The first lady’s emphasis on wildlife preservation in Kenya drew another contrast to the policies of her husband’s administration, which earlier this year overturned an Obama-era ban to all some elephant trophy imports.

She also visited an orphanage in Kenya, where she held and bounced infants and was encircled by a group of older children in song and dance. The first lady swayed side to side and smiled as the children presented her, stem by stem, a bouquet of red and white roses.

On the final stop of her trip, Melania Trump traveled to Egypt, where she was received by President Al Sisi and the first lady of Egypt at the presidential palace. She then toured the pyramids and the Great Sphinx.

What she wore during the trip drew attention and commentary, including whether she intended to send a message on gender equality with her choice to wear a tie and pants during her visit in Egypt.

When asked about her fashion choices by a reporter while in Egypt, Trump said, “I wish people would focus on what I do, not what I wear.”

President Trump for his part has yet to visit the continent of Africa since he took office, and the White House has not said whether he intends to visit at some point in the future.

At a rally this week, he offered his a positive review of his wife's trip.

“She's doing a great job as first lady, I will tell you. Really great," President Trump said at the Tuesday rally in Mississippi. "And you think that's an easy job? That's not an easy job. That's a tough job. She's fantastic.”