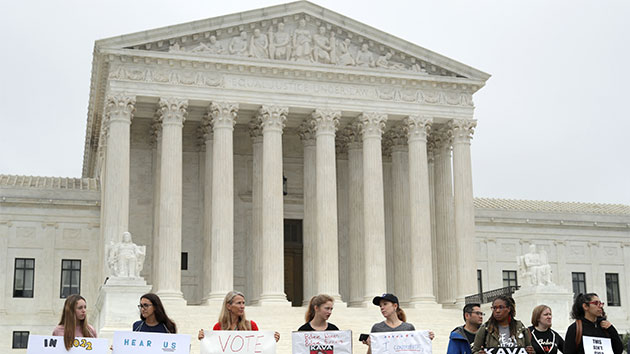 Chip Somodevilla/Getty Images(WASHINGTON) — President Donald Trump was one of many who flooded social media in the minutes and hours after the Senate voted to confirm Brett Kavanaugh as a new Associated Justice of the Supreme Court.

"I applaud and congratulate the U.S. Senate for confirming our GREAT NOMINEE, Judge Brett Kavanaugh, to the United States Supreme Court. Later today, I will sign his Commission of Appointment, and he will be officially sworn in. Very exciting!" Trump wrote on Twitter.

The reactions on social media unfolded as hundreds of protesters continued to demonstrate on the steps of the Supreme Court.

White House press secretary Sarah Sanders pointed to the shift in the political tilt of the Supreme Court that Kavanaugh is expected to bring.

Sen. Dianne Feinstein, D-Calif., was outspoken in her criticism of Kavanaugh throughout the confirmation process and she held on to that sentiment after the vote as well.

"Confirming Brett Kavanaugh in the face of credible allegations of sexual assault that were not thoroughly investigated, and his belligerent, partisan performance in last Thursday’s hearing undermines the legitimacy of the Supreme Court," she wrote on Twitter.

By contrast, Sen. Lindsey Graham, R-S.C., was one of Kavanaugh's most ardent supporters during the confirmation process, and he posted a celebratory picture shortly after the vote finished.

The National Rifle Association posted a tweet with a quote from Chris Cox, the executive director of the NRA's legislative arm, along with a picture congratulating Kavanaugh.

"The @NRA congratulates Brett Kavanaugh on his confirmation to #SCOTUS. Kavanaugh is an eminently qualified jurist who will interpret the Constitution as the framers intended. He respects our #2A right to keep and bear arms for self-defense," Cox said in the quote.

Rep. Steve King, R-Iowa, also alluded to a policy change that could come about as a result of Kavanaugh's joining the court, using a picture of a baby as a way to reference the Supreme Court's role in the debate over abortion.

"Soon, babies like this little angel will be protected in the womb by law," King wrote in a tweet along with the picture of an unidentified baby.

The school did not reference the controversy in their statement.

"Georgetown Prep congratulates Justice Kavanaugh on his confirmation and promise our prayers for him and his family as he strives to be that person for others in the service of our nation," the school said in a statement.

Ohio Gov. John Kasich, who was one of more than a dozen Republican rivals of Trump during the 2016 election, released a statement decrying the combative process and partisanship shown during this confirmation.

"America may have gained a new member of the Supreme Court, but a part of our nation's soul was lost during this toxic process," Kasich said in a statement he released after the vote.

"The zero-sum game environment we are in today, where many are focused on winning at all costs instead of what's best for our country, must end if we ever wish to begin healing these partisan divisions and tackling some of the most serious problems facing our nation," Kasich wrote.

Talk show host Ellen DeGeneres chose not to directly address Kavanaugh but instead focused on Christine Blasey Ford, who accused Kavanaugh of sexually assaulting her in high school, which he denied.

"This tweet is for Dr. Ford. You put yourself through so much and I want you to know it wasn’t in vain. You started a movement and we’ll see it through. If they won’t listen to our voices, then they’ll listen to our vote," DeGeneres wrote on Twitter.

Similarly, just minutes before the Senate vote, comedian and actor Jim Carrey wrote that Ford is an example of "Real American heroism."