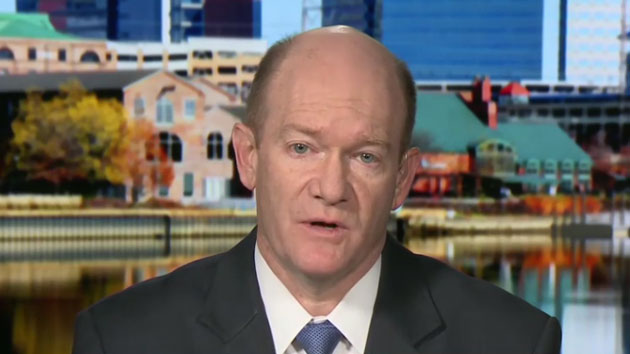 ABC News(WASHINGTON) — As the Senate heads closer to a final vote on whether to confirm Supreme Court nominee Brett Kavanaugh, accused of sexual assault and misconduct, Democratic Sen. Chris Coons said Friday he’s “disappointed” about the additional FBI investigation into the allegations, but insists the outcome is yet to be determined.
"I was disappointed in the scope of the interviews and I was disappointed in the scope of the materials," Coons, D-Del., told ABC News’ Senior White House Correspondent Cecilia Vega on Good Morning America, calling the FBI investigation a "narrow" look into whether there was evidence to corroborate claims made by Christine Blasey Ford and Kavanaugh's second accuser Deborah Ramirez.
"You can’t find what you don’t look for," Coons said. “There were a few people interviewed and there were the people who were potential eyewitnesses to both incidents.”
Later Friday, he voted against advancing Kavanaugh's nomination.
Coons, who sits on the Senate Judiciary Committee, said his office has heard from many “additional corroborating witnesses” the FBI never interviewed but are now taking their accounts to the news media.
"I would agree that the materials that I read did not provide direct corroboration, but there were a dozen, two dozen other witnesses who were not interviewed," Coons said. "I am not blaming the FBI," Coons added.
Kavanaugh’s freshman-year roommate at Yale University, James Roche, told ABC News he was concerned the FBI hadn’t contacted him about his view that Kavanaugh lied under oath about his drinking habits in college.
"If they wanted to talk about Brett's college background, they would've talked to Brett's college roommate and they didn't," Roche said.
Roche also described Kavanaugh’s drinking as "unusual" and said he drank heavily to the point of becoming “angry” and “belligerent.”
Although Coons expressed disappointment in the investigation, he praised his GOP colleague, Sen. Jeff Flake, for helping make it happen.
In an op-ed published in the Wall Street Journal Thursday evening, Kavanaugh admits he was "very emotional" during his testimony before the Senate Judiciary Committee last Thursday, writing, "I might have been too emotional at times. I know that my tone was sharp, and I said a few things I should not have said."
Coons agreed with Kavanaugh that “he said things that he should not have."
"As a sitting federal circuit court judge, he knew better than to engage in an aggressive, partisan attack," Coons said.
Coons said undecided senators ought to “weigh very carefully” the temperament Kavanaugh displayed during last week’s hearing.
When asked whether Kavavaugh will be confirmed, Coons simply said: "I don’t know."
“Several of my friends who are undecided have not returned my calls in the last day and that typically is a way a senator tells you they’re busy deciding,” Coons said. “I think this will be very close and we’ll have to find out later today when we vote.”
The final confirmation vote in the full Senate is expected Saturday.