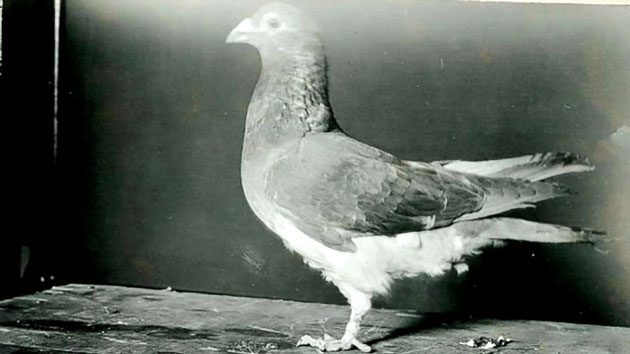 Department of Defense
Posted on October 5, 2018 by ABC News

Department of Defense(WASHINGTON) — In the third floor hallway of the Pentagon, just outside the Army Chief of Staff's office, there is a pigeon.
Walking the corridors, the lifelike pigeon stands out among the cases of military history that display Revolutionary-era bayonets, Civil War uniforms and replicas of helicopters used in Vietnam. Upon closer inspection, one might notice the pigeon is so life-like because it has been taxidermied. It's also missing one leg.
That pigeon's name is "President Wilson" — an unsung hero of World War I that made a daring flight to save U.S. troops exactly 100 years ago on Friday.
President Wilson was a military carrier pigeon, one of many in the U.S. Army Signal Corps that delivered messages between commanders and troops on the front lines. The pigeons were especially useful tools of communication during World War I when the telephone and telegraph were still unreliable new technologies.
According to U.S. military accounts recorded in the U.S. Army Center of Military History and the National Archives, Wilson was born in France and first assigned to the U.S. Army's newly formed Tank Corps, delivering messages to Tank Battalions commanded by Col. George S. Patton in the Battle of Saint-Mihiel.
But soon afterward, Wilson was assigned to an infantry unit conducting operations near Grandpré during the Meuse-Argonne Offensive.
On the morning of Oct. 5, 1918, his unit came under attack, and Wilson was dispatched to send a message that the unit needed artillery support. During the 25-mile journey, German soldiers spotted him and began firing into his flight path. (It should be noted that some accounts of Wilson's heroics place the event as occurring on Nov. 5, but multiple historians reached by ABC corroborated the Oct. 5 date.)
Wilson was hit several times, losing a leg and suffering a wound to his chest, but he managed to deliver the message in a record 25 minutes.
Surviving his wounds, Wilson was retired and sent to the U.S. Army Signal Corps Breeding and Training Center at Fort Monmouth, New Jersey, where he would live another eleven years.
After his death, Wilson was taxidermied and presented to the Smithsonian Institution before being transferred to the custody of the U.S. Army in 2008. Now, located in the prestigious halls of the U.S. military's headquarters in Arlington, Virginia, Wilson serves as a reminder that these simple birds — often considered a nuisance by the general public — were once war heroes.

Department of DefenseCarrier pigeons were used by both the Allied and Central Powers during World War I and could even provide updates to military commanders when launched in midair from planes.
"Launched mid-mission, the birds would fly back to their coops and update ground commanders on what the pilots had observed," the National Archives wrote in a blog post in January. "Quick updates like this were essential for leaders to know what the battlefield looked like and what the enemy was doing in its own trenches."
"Tanks carried the birds in order to relay the advance of individual units. Even after the introduction of the radio, pigeons were often the easiest way to help coordinate tank units without exposing the men to dangerous fire. Without a radio set, the soldiers would have had to leave the relative safety of their tanks to relay or receive orders," the Archives said.
When the pigeons weren't in use, they were stored in mobile units, often converted horse carriages or even double-decker buses.
The birds are thought to use low-frequency sound waves to map their environments and find their way from location to location.
Another famous World War I pigeon was known as Cher Ami — his moment of heroism came during the Meuse-Argonne Offensive in the fall of 1918.
The German Army surrounded elements of the 77th Division for five days, at one moment confusing the Americans as they accidentally shelled their own men in an attempt to fire at the enemy.
Messages were unable to get to U.S. commanders, so Cher Ami was released as the division's last hope. Like Wilson, Cher Ami flew through a barrage of gunfire, also sustaining injuries to his leg and chest. But he successfully delivered the message, ending the friendly fire.
The French even awarded Cher Ami the Croix de Guerre with Palm, a military decoration, for his service.
Military carrier pigeons were again used in World War II. In that war, 32 pigeons were awarded the United Kingdom's Dickin Medal for their heroic actions.
Copyright © 2018, ABC Radio. All rights reserved.