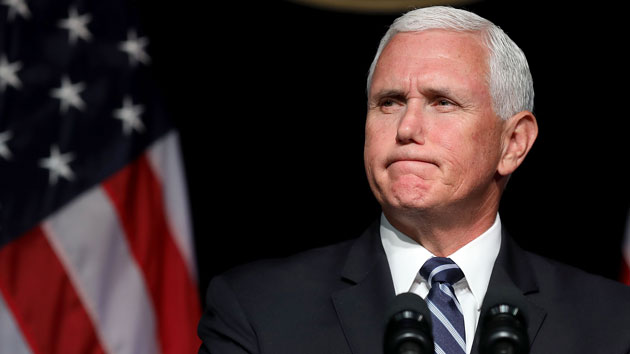 Chip Somodevilla/Getty Images(WASHINGTON) — Vice President Mike Pence fired off a strong warning to China on Thursday, saying in a fiery speech, "We will not be intimidated and we will not stand down."
He criticized China for its militarization of the South China Sea, its trade practices and intellectual property theft, its crackdown on political opposition and religious groups at home and its political interference in the U.S. and around the world.
But most of all, he portrayed China as a growing threat to the U.S., even on a military front.
"Chinese security agencies have masterminded the wholesale theft of American technology, including cutting-edge military blueprints and using that stolen technology. The Chinese Communist Party is turning plowshares into swords on a massive scale," Pence said in a speech at the Hudson Institute in Washington, D.C.
"China wants nothing less than to push the United States of America from the Western Pacific and attempt to prevent us from coming to the aid of our allies. But they will fail," he added.
Last week at the United Nations Security Council, President Trump said China is interfering in the 2018 midterm elections.
Pence followed that up, saying intelligence assessments found that China is targeting U.S. state and local governments as well as officials to exploit any divisions between federal and local levels on policy.