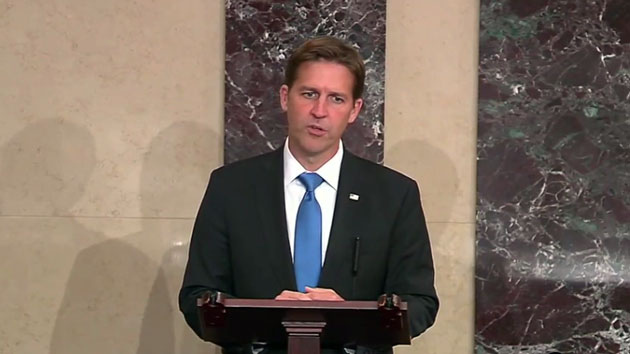 ABC News(WASHINGTON) — Sen. Ben Sasse has been an ardent "never Trumper" since the campaign — and that was on display when he gave an impassioned speech about the #MeToo movement and the upcoming vote on Brett Kavanaugh’s Supreme Court nomination Wednesday.
"We all know that the president cannot lead us through this time. We know that he's dispositionally unable to restrain his impulse to divide us. His mockery of Dr. Ford last night in Mississippi was wrong but it doesn't really surprise anyone. It's who he is," Sasse said of Trump’s comments at a campaign rally about Christine Blasey Ford, one of the women who has accused Kavanaugh of sexual assault. Kavanaugh has flatly denied the allegations.
Sasse and the rest of the Senate will be able to view the findings of the FBI investigation into the allegations against Kavanaugh throughout the day Thursday before they vote on his confirmation Friday.
But the other points Sasse made in his evening speech on the Senate floor seemed to give voice to the conflicting feelings that many have about the upcoming confirmation vote.
Sasse, a Republican from Nebraska and member of the Senate Judiciary Committee, said that the committee is "fundamentally broken" and decried how "the Senate is being swallowed up whole by 24/7 cable news."
He pointed not to "the important #MeToo movement" as the reason for the divisiveness over the Kavanaugh confirmation vote but how the country "is accelerating our descent into tribalism."
"No matter how much cable news screams this, it would be an egregious offense against the cause of women to call this one, up-or-down vote a proxy for the validation and validity of claims of sexual violence," he said.
Sasse also said that he urged the president to pick a female nominee before Kavanaugh’s name was publicly announced.
"Although I’ve said many complimentary things about Judge Brett Kavanaugh … I urged the president back in June and early July to make a different choice before he announced this nomination," Sasse said.
"I urged him to nominate a different individual. I urged the president to nominate a woman. Part of my argument then was that the very important #MeToo movement was also very new and that this Senate is not at all well prepared to handle potential allegations of sexual harassment and assault that might have come forward. This was absent knowing a particular nominee," Sasse said.
He went on to talk about the importance of the #MeToo movement and to decry the assertion that he said has been present on cable news and social media that anyone supporting Kavanaugh’s confirmation — like Sasse — is voting against women or sexual assault victims.
He said that the "false choice that is being repeated hour after hour … [is] that this confirmation vote about one vacant seat on the Supreme Court, that in that vote, we are somehow going to be making a giant, binary choice about the much broader issue about whether we do or don’t care about women. That is simply not true."
"The Supreme Court confirmation vote isn't a grand choice about whether we love our daughters or whether we trust our sons. That is not the choice before is. This is a consent decision about one person for one seat," Sasse said.
Sasse repeatedly asserted that he believes academic findings about the widespread nature of sexual assault and the rarity of false sexual assault accusations. He also shared that he has two friends who have been raped, saying "it is an act from the pit of hell."
"Sex is big, not small, and you don’t get to decide it for someone else," he said.
Sasse also recounted calls from concerned constituents on both sides of the Kavanaugh debate, and said his wife had called him "sobbing after both opening statements" from Ford and Kavanaugh's testimonies before the Senate Judiciary Committee last week.