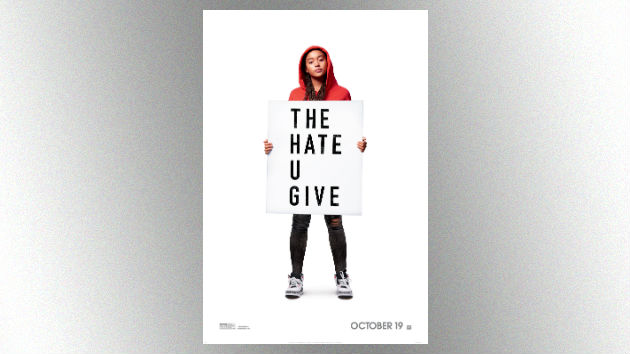 20th Century Fox(LOS ANGELES) -- 20th Century Fox and AMC Theaters are teaming up to give "under-served and under-represented youth" a chance to see the upcoming drama
Posted on October 4, 2018 by ABC News

20th Century Fox(LOS ANGELES) — 20th Century Fox and AMC Theaters are teaming up to give "under-served and under-represented youth" a chance to see the upcoming drama The Hate U Give.
According to Deadline, AMC is offering free screenings of the film in select cities on Saturday, October 6.
The screenings, said to be a launching pad to "drive empowerment, empathy, and dialogue among communities," will be held at 11 a.m. in nine metro areas: Atlanta, Baltimore, Dallas, Houston, Los Angeles, Miami, New York, Philadelphia, and Washington, D.C.

Interested schools, community groups and non profit organizations can apply to screenings.thehateugive.com to be considered for a free screening.

Supporters can also donate to the cause and to screenings for classrooms around the country. 20th Century Fox's parent company, 21st Century Fox, will match donations up to $25,000.
Additionally, there's a complimentary curriculum guide for middle school, high school and college students available about the novel and film.

The Hate U Give, a film adaptation of Angela Thomas' novel of the same name, follows the story of a sixteen-year-old girl named Starr, played by Amandla Stenberg, who must decide if she'll stand up for what she believes after witnessing the shooting of her best friend by a police officer.

The Hate You Give opens nationwide October 19.

Woo hoo! Fox renews ‘The Simpsons’ for seasons 33 and 34
Asian man stabbed in back in Chinatown, suspect charged with attempted murder as a hate crime
Zoom to provide automatic closed captioning for all free accounts
Indoor off-season football training starts Feb. 22 for Treasure Lake Titans
Biden says he can’t give a date when COVID-19 crisis will end
Mom from Alaskan village isolates for 10 weeks to safely give birth to twins