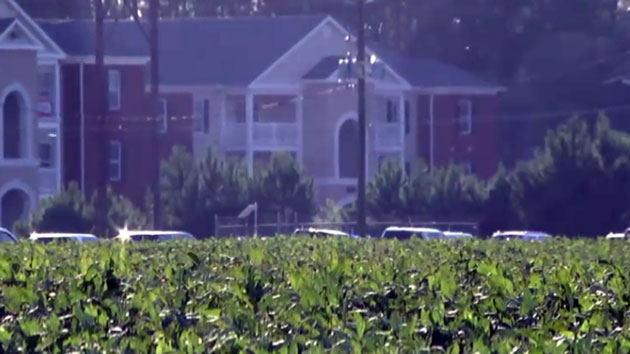 ABC News(FLORENCE, S.C.) — Authorities have identified the man who allegedly opened fire on law enforcement officers in a residential neighborhood in South Carolina on Wednesday, killing one and injuring several others.
A source with the Florence County Sheriff's Office told ABC News on Thursday that the detained suspect is Fred Hopkins, who was at the home where the shooting happened in Vintage Place, an upscale suburban neighborhood in the city of Florence, about 80 miles east of Columbia.
Hopkins allegedly began shooting at law enforcement officers who came to serve a search warrant for another individual at the residence. There were four foster children inside the home at the time of the incident, the source told ABC News.
Three deputies from the Florence County Sheriff's Office and four officers from the Florence Police Department were shot, authorities said. Some of the injuries are "serious," a spokesperson for the city of Florence told ABC News.
One of the officers was pronounced dead at a local hospital, the Florence County coroner told ABC News. That officer was identified as Florence Police Department veteran Terrence Carraway, 52, of Darlington.
The suspect was ultimately taken into custody Wednesday.
Florence Police Chief Allen Heidler described the slain officer as the "bravest officer" he's ever known.
"Today we lost a good friend of mine — an officer that I’ve known for 30 years," Heidler said during a news conference Wednesday evening.