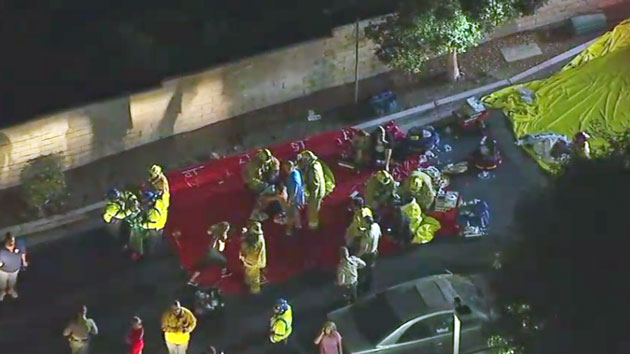 ABC News(THOUSAND OAKS, Calif.) — At least 19 adults and children were sickened by pool chemicals in Southern California on Wednesday evening due to an equipment malfunction at a private swimming club, authorities said.
Twelve people were rushed to local hospitals and others were treated on-scene for minor injuries at the Daland Swim School in Thousand Oaks, California, after being "overcome by fumes," according to the Ventura County Fire Department.
Firefighters responded to the swim club around 6 p.m. local time and transported those needing immediate care to Simi Hospital and Los Robles Hospital in Thousand Oaks, about 40 miles west of Los Angeles, the department said.
The department did not release any details about the nature of those individuals' injuries, but it said some those affected were children. It's unclear if a swimming class was in session at the time.
Firefighters were dispatched to the scene after receiving calls about individuals coughing and having trouble breathing, Ventura County Fire Captain Stan Ziegler said Wednesday night.
"Currently, we have eight patients who need immediate transport to the hospital with various conditions from the fumes from the pool chemicals," Ziegler said at a briefing on the scene. "The pool chemicals that are most commonly used are chlorine and some type of acid — muriatic acid, most commonly. There was a slight smell of bleach in the facility as the students were exiting."
Video posted on social media captured the chaotic scene as parents arrived to check on their children.
At least a dozen ambulances and several medics were on the scene to examine those who may have been exposed as worried parents hovered nearby, the footage showed. Some patients were placed on stretchers, while others were connected to what appeared to be oxygen tanks.
"We are accessing everyone that was in the facility at the time of the exposure and we’re making sure that they are cleared medically before they are released," Ziegler added.
Officials at Daland said the incident appeared to stem from a problem with one of the pool's pumps.
"There was bubbles that came up into the lap pool and we suspect that it was chlorine gas," facility owner Leslie Darland-James told ABC's Los Angeles station KABC. "That's never happened here before, so for us it was quite a scary moment."
The cause of the malfunction is under investigation. Residents and motorists were told to avoid the surrounding area during the investigation.