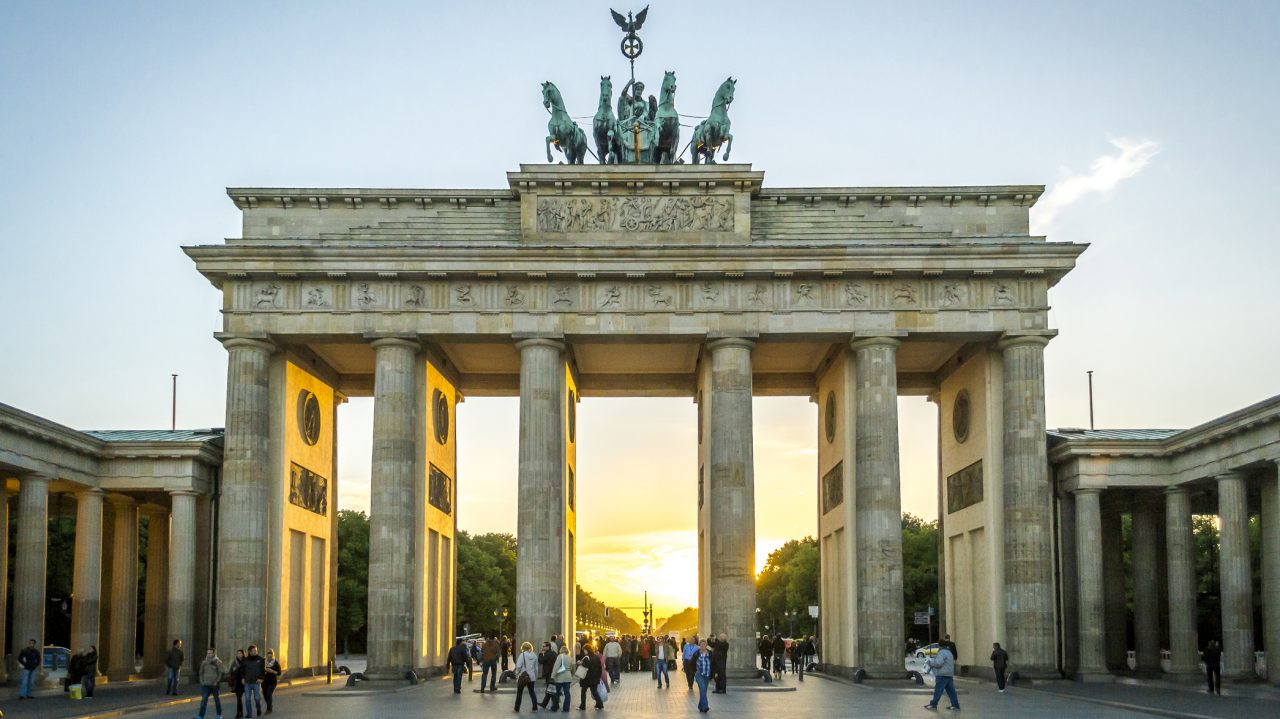 iStock/Thinkstock(BERLIN) — The world was watching on Nov. 9, 1989, when east Berliners climbed over the Berlin Wall in front of the Brandenburg Gate, reuniting a country long divided. But it was about a month earlier, on Oct. 3, that Germany officially became one again.
On Wednesday, the 28th anniversary of German Unity Day was celebrated with the unveiling of a large-scale photo collage installed by the French street artist known as JR.
The images depict Germans celebrating atop the wall, the word “freedom” scrawled below them, while border guards look on, helpless to act. The gate is the backdrop of the city’s annual Unity Day celebration, which features food and entertainment in the heart of the city, and draws an average of a million visitors a year.
Although this year marks the first year where the wall has been gone for longer than it stood, the country’s divisions are not a thing of the past. Just a few blocks away from the main celebration, a right-wing demonstration with the motto, “Day of the nation,” drew at least several hundred participants while a counter-demonstration nearby attracted a larger crowd, complete with musical performances and plenty of peace flags.
With the repercussions of violent, anti-migrant demonstrations in the East German city of Chemnitz last month still playing out in the highest levels of government, such demonstrations serve as a reminder that Germany, despite its history, is not immune to the social and political fragmentation that many of its European neighbors — and the US — are also experiencing right now.
The far-right nationalist Alternative for Deutschland (AfD) became the first far-right party to enter Parliament in more than half a century last September. It is especially popular in former East Germany — above all, in Saxony — where it garnered more votes than Chancellor Angela Merkel’s ruling party, the Christian Democratic Union (CDU).
Its popularity is on the rise: a poll released on Monday indicated that across the country, the AfD is now the country’s second most popular party, albeit by a single point — 18 percent compared to the Social Democratic Party's 17 percent. The party ran on an anti-Islam platform and its politicians have sparked outrage with anti-Semitic statements — elements that do not bode well for those in Germany who strive for social unification.
Right-wing protests and a counter-demonstration highlight division in Berlin
At around 2 p.m. on Unity Day, a far-right nationalist group called “We are for Germany,” an offshoot of the anti-Islam citizen's movement, PEGIDA, gathered in front of Berlin’s central train station to march for border controls and a referendum on Germany leaving the EU, among other demands, according to the Facebook event page.
When ABC News arrived on the scene, several hundred mostly male demonstrators had gathered in an area cordoned off by police. Many held German flags, while some had signs attacking Chancellor Angela Merkel, who is a primary target of many right-wing groups that criticize her migration policy. “Chemnitz is everywhere in Germany,” read one sign, perhaps a reference to the anti-immigrant sentiment present during last month’s events in the eastern German city.
Across the police barrier, a small group of counter-protestors held up handmade signs, occasionally chanting “We lost the war” and “There is no right to Nazi propaganda.” At a certain point, the country’s divisions seemed on full display as right-wing demonstrators turned to face the protestors, chanting, “We are many.” Both sides were equally impassioned.
A much larger counterdemonstration showed its own display of strength a short walk to the east, where protesters outnumbered their right-wing counterparts. A diverse range of participants had gathered, many holding rainbow-colored peace flags and “Refugees Welcome” signs, taking in a schedule of performances and speakers before the march began. The demonstration was organized by the Neighborhood Initiative for Civil Courage Against Right-Wing Extremism and “Berlin against Nazis,” and it's one of several anti-right-wing extremism demonstrations slated to take place in Berlin over the next few weeks.
The memory of Chemnitz
In the east German town in Chemnitz last month, tens of thousands of right-wing demonstrators, from the AfD and various extremist citizen's groups, such as “Pro Chemnitz,” took to the streets to protest Chancellor Merkel’s handling of immigration policy after the death of a German man at the hands of an Iraqi and Syrian. Large-scale protests — met with equally formidable counter-protests — came after several days of violent protests earlier in the week, where right-wing extremists, mobilized by rumors circulating online, chased after foreigners and hurled xenophobic insults. The events were strongly condemned by Chancellor Merkel.
The demonstrations in Chemnitz revealed divisions at the highest level of government. Hans-Georg Maassen, then the chief of Germany’s federal domestic security agency, challenged the chancellor’s position on Chemnitz in the German newspaper, BILD. In an interview, he questioned the veracity of a video circulating on social media that showed men attacking foreigners, suggesting it may have been fake. While the comments ultimately cost him his position, German media speculated that it had sent a clear message of support to right-wing extremists. Maassen’s motives came under further suspicion when German public broadcaster ARD announced he had shown AfD politicians parts of an agency report before it was officially released.
Despite these divisions, on German Unity Day, JR's work might still be seen as a reminder that despite having different views, a country can still come together as one.