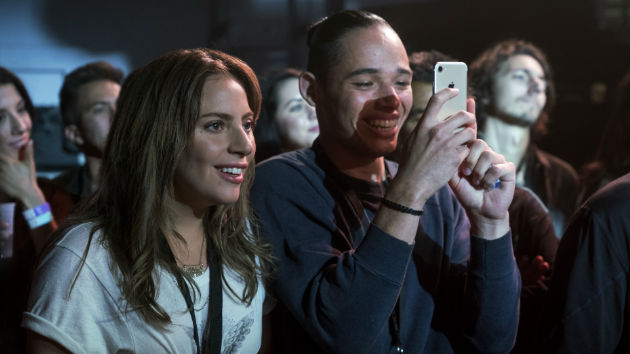 Clay Enos/Warner Bros. Pictures(NEW YORK) — By now, you've probably heard about how Lady Gaga fed Bradley Cooper pasta during their first meeting for A Star Is Born. But Anthony Ramos – who plays Gaga's character's best friend Ramon in the film – says their bonding experience was a little different.

“She hugged me and she said, ‘We knew it was gonna be you and I'm so happy you're here,’” he tells ABC Radio of his and Gaga's first encounter on set. “And once that happened I was like, 'Oh yeah, we're good.' That was pretty much all I needed.”

He quips, “Pasta would have been nice but, you know, I think the hug was enough.”

Ramos admits he wasn’t quite sure what to expect from Gaga, but says they "vibed immediately" because she was so open and welcoming.

“She's a mega-star and she totally doesn't have to be warm and she is,” he says. “She's the warmest and most beautiful loving soul, so that was a beautiful, pleasant surprise.”

Ramos, who previously showed off his singing talents in Broadway’s Hamilton, says he deeply related to A Star Is Born as a songwriter. He got chills while watching the scene where Gaga’s character, Ally, begins writing the song “Shallow,” which she later performs with Cooper’s Jackson Maine.

“I write all my songs so it's like, to see her do that on screen, I've never seen anybody do it like that — so honestly and truthfully on screen,” he says.

A “gobsmacked” Lou Diamond Phillips on directing Catherine Zeta-Jones in ‘Prodigal Son”s mid-season finale
‘Degrassi: The Next Generation’ star Jahmil French dead at 29
After a life-threatening pregnancy, Olympian Allyson Felix joins campaign to protect pregnant people
‘This has been a huge mental toll’: Working moms still struggle a year into the pandemic
First lady wades into school reopening debate with trip to two schools
‘iCarly’ star Jennette McCurdy quits acting: “I resent my career in a lot of ways”