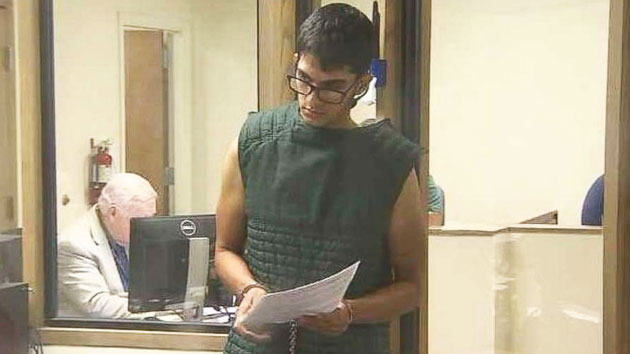 WFTV(ORLANDO, Fla.) — A Florida student pilot who breached airport security and boarded an empty plane will be deported as part of his sentencing, authorities said Monday.
Nishal Sankat, 22, pleaded guilty to a felony burglary charge on Monday after he jumped a security fence at the Orlando-Melbourne International Airport in Florida last month and entered a plane’s cockpit, authorities said.
Sankat, a student at the Florida Institute of Technology, will have his visa revoked and be deported to his native country of Trinidad as part of a plea agreement, according to sentencing documents.
He was also ordered to go on the country's no-fly list and pay the Melbourne Airport Police Department $909.45 to cover investigation costs, authorities said.
Police arrested Sankat on Sept. 20 after a brief chase. Airport technicians first noticed that he didn’t have proper ID.
One technician said he tackled Sankat and tried to hold him down while a co-worker alerted police. Sankat was able to break free and run away.
Officers caught up with him a few minutes later and took him into custody, police said.
The incident, which took place around 2 a.m., forced officials to lockdown the airport as police and FBI authorities investigated the scene.
Investigators eventually concluded that Sankat acted alone and planned on harming himself. He was apparently suffering from depression and mental health issues at the time, investigators said.
Copyright © 2018, ABC Radio. All rights reserved.