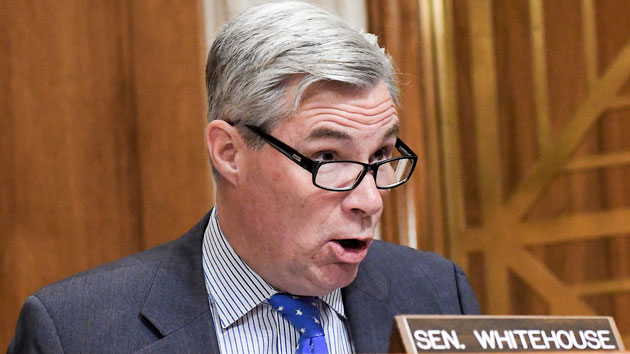 Mark Reinstein/Corbis via Getty Images(WASHINGTON) — Sen. Sheldon Whitehouse signaled Tuesday his satisfaction with the White House's latest approach to the FBI background investigation into Supreme Court nominee Brett Kavanaugh that President Donald Trump approved Friday.
"I think I'm satisfied," the Rhode Island Democrat told "Good Morning America" chief anchor George Stephanopoulos Tuesday. "We don't know all the details yet but, clearly, if they have been given free rein to interview whomever they want, that's a very good sign.
“The last thing we want is a sham investigation,” Whitehouse, a member of the Senate Judiciary Committee, said, adding that the FBI is “probably should be able to get this done by Friday.”
In the past 24 hours, in response to pressure from Democratic and moderate Republican senators, the White House has eased limitations on the FBI background investigation into Kavanaugh that Trump set into motion Friday.
After Christine Blasey Ford accused Kavanaugh of sexual assault, the Senate Judiciary Committee held a marathon, emotionally charged hearing to weigh testimony from Ford and Kavanaugh last Thursday on her accusation that he attacked her when they were high school.
Kavanaugh fiercely denied the allegation. With the fate of his Supreme Court nomination on the line, Whitehouse told “GMA” Tuesday, he has "grave doubts" that Kavanaugh was telling the truth during his testimony.
"I have very grave doubts at this point but that's one of the reasons we so badly wanted an investigation so we could get to the truth of that rather than have to deal with surmise or suspicion," Whitehouse said. "Ultimately, I do think when somebody is coming before the United States Senate and want to be a United States Supreme Court judge they ought to tell the truth. If they're lying that's something that is disqualifying."
When pressed whether he thought Kavanaugh lied to the committee, Whitehouse hedged on the answer, responding, "I'm waiting to see what the FBI report comes back with. I certainly would not rule it out. There's plenty to disbelieve in what he said but, again, it's very hard to sort through this until you have the investigation which is why we pushed so hard to make sure that took place."
The White House, at the urging of the Senate Judiciary Committee led by Sen. Jeff Flake, R-Ariz., directed the FBI to look into what it deems as "credible" claims of sexual assault.
But Trump continued his staunch defense of his Supreme Court pick Monday, calling for a "comprehensive" but "quick" FBI investigation into the claims of sexual misconduct as the agency works to meet a looming deadline.
Copyright © 2018, ABC Radio. All rights reserved.

FBI director testifies for first time since Capitol assault
VCU fraternity under investigation after death of freshman student
A bipartisan coronavirus relief bill would be easier to pass: GOP Sen. Rob Portman
Democratic leader says AG may look at Trump in Capitol riot probe
Congress aims to avoid politics with independent Jan. 6 investigation
Biden’s message to world: ‘America is back’ — but ‘democratic progress is under assault’ in United States