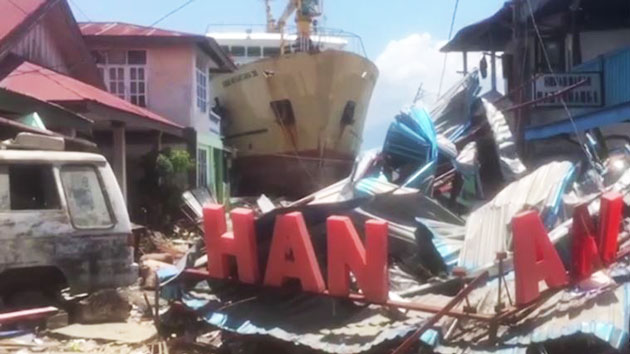 ABC News(SULAWESI, Indonesia) — The death toll for Sulawesi’s earthquake and tsunami last Friday has been raised to over 1,200, according to the national disaster agency. The announcement came as survivors in the stricken city of Palu grow increasingly desperate for water, food and essential supplies.
The damage to roads and infrastructure in the region has prevented much-needed aid from reaching critically damaged areas.
While the military have been able to assist several humanitarian relief convoys and air deliveries, the number of people in need is presenting the Indonesian government with a vast logistical and humanitarian challenge just a month after another island is still struggling to recover from an earthquake that killed 430 people.
Police are having to deal with a delicate security situation as desperate residents have crowded convoys and scuffles broken out as people fight for limited but critically needed supplies. Stores and gas stations have been looted and cleared of basic goods — leaving those without waiting and hoping for aid supplies to make it north.
As a cargo plane failed to land at Mutiara SIS Al-Jufrie Airport in Palu Sunday because the airport was overrun by hungry residents, one woman cried, “We have not eaten for three days.”
There have since been successful deliveries of rice and water to the airport, but the humanitarian missions are reliant upon police escorts and distribution by soldiers to manage the crowds of tired and hungry survivors.
As rescue workers and volunteers continue the daunting task of sifting through wreckage in Palu to search for survivors, satellite images reveal the vast scale of the devastation following the 7.5-magnitude earthquake, which brought waves of almost 20 feet to the coastal city.
The images, from Digital Globe, offer stark contrasts with photographs dated before and after the twin disasters. They show residences and shops lining the coast remain submerged days after the waves first hit Palu in northern Sulawesi.
In some images the effects of liquefaction — where the vibrations and tremors in an earthquake cause the ground, and everything built on it, to ripple and move like water — and landslides is stark.
Large swathes of what one photo in August shows neighborhoods of multi-coloured houses has now disappeared under a sea of brown mud.

Hunt for survivors
There are still hopes that people may yet be alive, buried under rubble across the region. There are large areas in the remote north that have yet to be accessible to rescue teams.
In a heartbreaking development Monday, the bodies of 34 schoolchildren were discovered by Indonesian Red Cross officials in a church that was buried by a landslide.
There were around a hundred students who were taking part in a Bible camp in Sigi province, south of Palu city.