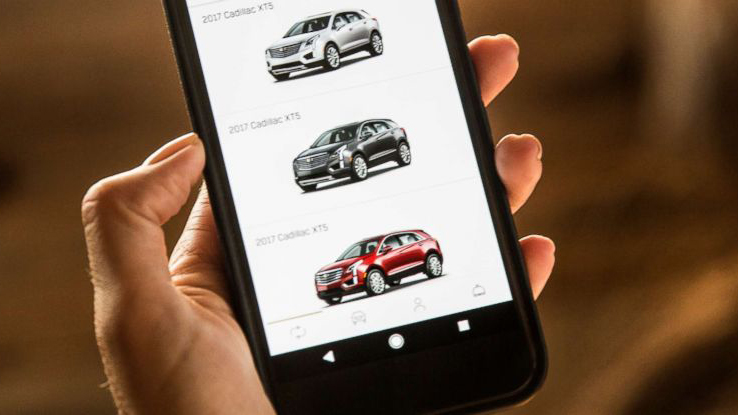 Cadillac(NEW YORK) — Imagine this: a gleaming new car is delivered to your doorstep with a full tank of gas. The baby’s car seat is securely buckled in the back. Your favorite radio stations are pre-programmed. Next month another car shows up. And again. And again.
The latest trend in the auto industry is not electric or self-driving vehicles. It’s subscription services. Instead of a three-year car lease, consumers agree to monthly contracts. All vehicle maintenance costs and insurance fees are bundled into one payment. There are no long-term commitments. A new car can be yours with a tap on an app.
A handful of carmakers including BMW, Porsche, Cadillac, Volvo and Lincoln are already testing these membership programs to build brand loyalty and gain an edge over the competition.
Rebecca Lindland, executive analyst at Kelley Blue Book, describes subscription memberships this way.
“It’s an evolution of mobility,” she told ABC News. “You’re paying for flexibility. Car ownership is no longer measured in years.”
BMW launched its subscription service, Access by BMW, this spring in Nashville. It offers three tiers of membership, ranging in price from $1,099 to $2,699 per month. Want to try out that ridiculously fast M5? It’s included in the highest price "M tier," which also gives drivers the ability to take home the German automaker’s i3 electric car and new X2 SUV. (BMW’s i8 supercar, unfortunately, is excluded.)
A company spokesman would not divulge numbers but said feedback from customers has been “heavily positive.”
“Consumers are looking at vehicle ownership in new ways,” he said. “The service allows members to switch in and out of the vehicles anytime and anywhere … and as often as desired.”
According to Court Kasten, manager of Access by BMW in Nashville, participants in the pilot program are switching out their vehicles twice a month on average. Many are first-time BMW clients.
"There are plenty of customers who have never driven a BMW before," he said. "Others are longtime BMW guys. They value the simplicity and flexibility."
BMW could decide within a year to expand the program beyond Nashville and it has already been forced to tweak it. The M tier now costs $1,000 less than its original $3,700 price and the Legend tier was slashed by $600. A third, more “affordable” tier, was also added.
The biggest barrier to this service is price, Lindland noted, adding that subscription programs are often three or four times the price of a regular lease. There could also be an unintended effect on consumers.
“The risk is that people could become less emotionally attached to their vehicles,” she warned. “It’s a new mindset and a totally different animal.”
According to a recent study by Cox Automotive, one in four drivers has heard of car subscription services. Generation Z and millennials found the subscription model the most appealing compared to Gen X and baby boomers.
Cadillac has been testing its BOOK by Cadillac subscription service in New York, Los Angeles and Dallas. For $1,800 a month and a one-time initiation fee of $500, members can choose from a variety of models by making a selection on Cadillac’s app. Eighteen vehicle swaps are permitted in one year and driving mileage is limited to 2,000 miles per month.
Ninety percent of BOOK by Cadillac customers are new to the brand, according to Christopher Smith, a Cadillac spokesman. More importantly, the program has helped shed Cadillac’s stodgy image.
“We are trying to attract a younger demographic with this,” he said. “They want this flexibility. We’re making this as easy and seamless as possible.”
Drivers in the Atlanta metro area have the option of signing up for Porsche Passport, the German sports car maker's subscription program. Need to impress someone? The Porsche 911 Carrera S is yours. Going on a road trip? Take your pick of the Cayenne or Macan SUV. Twenty-two different models are available for a monthly price of $3,000. Or pay $2,000 for eight Porsches.
Having the ability to drive a new car every week or every few months can be tempting. Who doesn’t love that new car smell? But these programs also make driving a little less personal. There’s no customization. What if you want a black M5 instead of red one? How would you feel about a stranger moving your personal belongings from one car to the next?
“We have a lot of stuff in our cars,” Lindland noted. “It’s our storage bin.”
Current drivers may not be swayed by these subscription models. But automakers are preparing for the future.
“This service is a little ahead of its time,” Lindland said. “Drivers today may not see the value in this service. But it will start to gain traction. In 10 years people may not need to buy cars.”