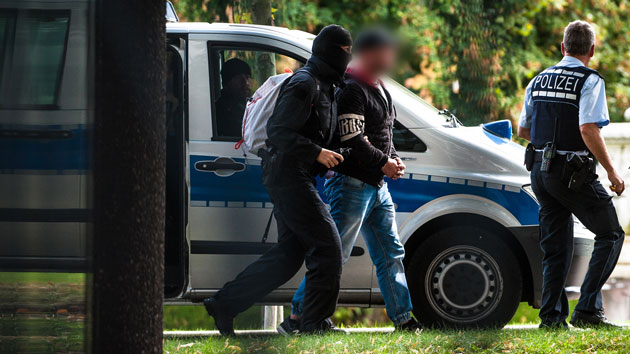 CHRISTOPH SCHMIDT/AFP/Getty Images(CHEMNITZ, Germany) — Six men were arrested in the early hours of Monday on suspicion of forming a far-right terrorism group called “Revolution Chemnitz.” The men are accused of planning armed attacks on “foreigners” and people who do not share their political ideology, according to a statement put out by Germany’s federal prosecutor’s office.
The men, who are between the ages of 20 and 30, are associated with what the prosecutor's office calls the “skinhead, hooligan and neo-Nazi” scene near the city of Chemnitz, according to the statement. A seventh man involved in founding the group was arrested last month.
Five of the detained men allegedly attacked and injured foreign-born residents of Germany with glass bottles and an electroshock weapon on Sept. 14 in Chemnitz, according to the statement. One of the victims sustained injuries from a glass bottle thrown at his head.
The Sept. 14 incident was supposed to be a “test run” for a planned attack on Oct. 3, according to authorities.
Violence against migrants is a growing issue in Germany. In 2017, refugees were targeted in 1,713 criminal acts, according to the advocacy group Pro Asyl and the Berlin-based Amadeu Antonio Foundation.
The region of Saxony, where Chemnitz is located, is a stronghold for an anti-Islam, far-right party, the Alternative for Deutschland, and has long struggled with neo-Nazi aggression.
Chemnitz made headlines in late August after a violent string of xenophobically motivated protests where up to 6,000 right-wing demonstrators took to the streets with neo-Nazis, harassing people who looked foreign and shouting slurs. Authorities have since opened 10 cases on extremists allegedly seen doing a Nazi salute, which is illegal in Germany.
“In the context of the kind of mobilization we saw in Chemnitz, there is always the danger that right-wing extremist terror cells will form in this atmosphere” Kira Ayyadi of the Amadeu Antonio Foundation told ABC.
She added that such demonstrations give people on the far right an opportunity to “network”.
“The alleged terror cell in Chemnitz shows once again the extent to which racist radicalization can take place in a short amount of time,” Ayyadi said.
Copyright © 2018, ABC Radio. All rights reserved.