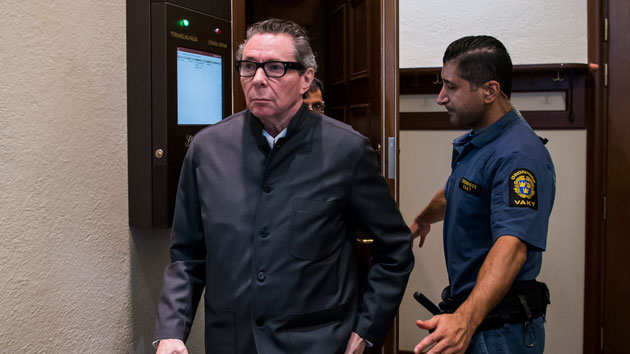 JONATHAN NACKSTRAND/AFP/Getty Images(STOCKHOLM) — Jean-Claude Arnault, the man at the center of a sex scandal that shook international cultural circles and led to the cancellation of this year’s Nobel Prize in Literature, was found guilty and sentenced to two years in prison for raping a woman seven years ago.
In a unanimous vote, Stockholm District Court has sentenced Arnault –- a French photographer and prominent cultural figure in Swedish academy circles –- to two years in prison, the minimum sentence. The maximum sentence for rape in Sweden is six years.
"The court's responsibility in a criminal case is to decide whether the prosecutor has proven the charges beyond a reasonable doubt. The evidence in this case has mainly consisted of statements made during the trial by the injured party and several witnesses," Gudrun Antemar, presiding judge said in a written statement.
Arnault faced charges of forcing a woman to engage in oral sex and intercourse in a Stockholm apartment in October, 2011.
"My client will appeal the verdict, because he is not guilty of that crime," Bjorn Hurtig, Arnault’s lawyer told ABC News.
The Stockholm District Court described its review of evidence, by Atemar and three lay judges, and verdict.
"The court has made a thorough evaluation of the evidence and the court's conclusion is that the evidence is enough to find the defendant guilty of one of the events for which the prosecutor has brought charges," the court said in the statement. "The injured party has been awarded compensation for damages."
Arnault, 72, has long been an influential culture figure in Sweden and beyond. He ran Forum, a prominent cultural center in Stockholm financed by the Swedish Academy. As a result of the sex scandal, the academy cut its annual funding to the Forum, which is co-owned by Arnault and his wife Katarina Frostenson, who has been a celebrated poet and Swedish academy member.
In November, just after the rape and sexual abuse accusations against Harvey Weinstein, which triggered the #MeToo campaign, Swedish newspaper Dagens Nyheter published allegations by 18 women, including academy members, their wives and daughters, who said they had been raped, sexually assaulted or harassed by Arnault.
Swedish Academy, which has long prided itself on its top-secret selection process, was caught up in further controversy when the paper reported Arnault had allegedly leaked the names of the literature prize winners seven times, including 2016 laureate Bob Dylan.
The verdict came at the start of 2018 Nobel award week, just before the announcement for medicine award, which immunologists James P. Allison, an American, and Tasuku Honjo, a Japanese citizen, won for their work on cancer therapy.
Copyright © 2018, ABC Radio. All rights reserved.