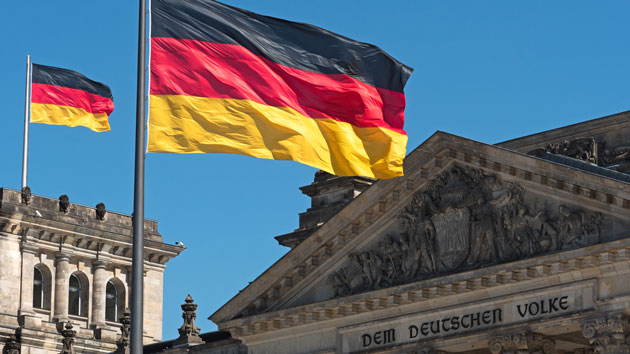 iStock/Thinkstock(BERLIN) — A German far-right nationalist party leader drew headlines over the summer by dismissing the Holocaust, which killed 6 million Jews and millions of others, as a mere “speck of bird poop” over hundreds of years of “successful German history.”
Now that same party, the Alternative for Deutschland, is launching an initiative to draw Jewish members in the central German town of Offenbach, and promoting the party's anti-Muslim platform as a pro-Jewish stance.
“The AfD is the only party in the Federal Republic that makes anti-Semitism toward Jews by Muslims a topic without trivializing it," the founder of the proposed initiative for Jewish AfD members, Dimitri Schulz, told German news agency DPA.
Referring to Chancellor Angela Merkel’s decision to let nearly a million asylum-seekers into German in 2015, Schulz said, the "mass immigration of young men from Islamic culture" was detrimental to Jewish life in Germany because of their "anti-Semitic socialization."
The party appears to be playing on fears stemming from several recent attacks against German's Jewish citizens, some of them committed by Muslims.
Some Jewish leaders may have heightened those fears, such as with a warning by the head of the German Jewish Council, Joseph Schuster, that Jews should avoid wearing traditional skullcaps in areas of the country populated by Muslims.
But Schuster like many other Jews in the country has slammed the AfD’s Jewish initiative, telling a local paper in the town of Passau that he could not “understand a Jew who sympathizes with the AfD or is involved in this party.”
Another organization, the Jewish Students Union of Germany, is planning a protest next week called "This alternative is not kosher," across the street from where the AfD's new Jewish section will meet.
“It’s a dangerous right-wing populist party, and it is a dangerous time for Jews and minorities,” said Dalia Grinfeld, the group's president. "What the AfD is doing is “putting on a mask of ‘we are Jewish-friendly,' but it is really trying to use German's Jews for self-promotion.
Most of German's Jews, who number around 100,000, do not seem drawn to the AfD, Grinfeld said. “It's sad some of our community members sympathize, but it’s a very small fraction.”
She added that the far-right nationalist party does one thing well — playing "on actual fears of Germans — not only Jews but of anyone. They look at society and see being afraid of otherness, and migration, and intensify them with their propaganda.”
Germany’s crime report for 2017 indicates that anti-Semitic attacks are on the rise, including postings of inflammatory content online, racist taunts and assaults. But 93 percent of the perpetrators are far-right Germans, according to Germany’s interior ministry.
The far-right AfD has a history of anti-Semitic remarks, besides the comment in June by its co-leader, Alexander Gauland, dismissing the Holocaust.
In 2017, a prominent regional party member, Bjoern Hoecke, called for a “180-degree reversal on the politics of remembrance” of the Holocaust, and said Berlin’s Memorial to the Murdered Jews of Europe is “a monument of shame.” (In response, activists trolled the lawmaker by building a miniature version of the memorial outside his home.)
The head of Human Rights Watch in Germany, Wenzel Michalski, told the media that his family has dealt with anti-Semitic aggression. His son transferred school after being repeatedly bullied and physically attacked for being Jewish, he told German media.
But Michalski told ABC News that Jews should abhor the nationalist, anti-Islam platform of the country's far-right party.
“This is a party that meets together with anti-Semites and Nazis, and it is completely absurd as a Jew to join it,” he said.
Copyright © 2018, ABC Radio. All rights reserved.