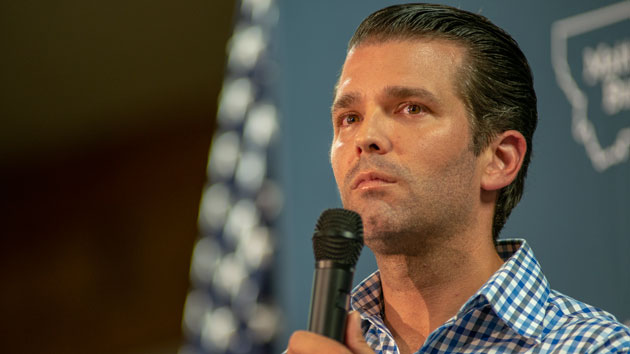 William Campbell-Corbis via Getty Images(NEW YORK) — Donald Trump Jr. is more concerned about the perceived threat posed to his sons than to his daughters in the #MeToo era, he said in a new interview.
The father of five talked about his fears amid these times of sexual misconduct accusations and the assault allegation facing Supreme Court justice nominee Brett Kavanaugh.
"I've got boys and I've got girls and when I see what's going on now, it's scary for all things," Trump, 40, told the Daily Mail.
A Daily Mail reporter then asked President Donald Trump's eldest son whether he feared more for his daughters or sons.
"Right now, I'd say my sons," he said of his three male children who range in age from 5 to 9.
His two daughters are 4 and 11.
The Daily Mail released a clip of the interview and fuller portions of it, which was conducted alongside his girlfriend, former Fox News host Kimberly Guilfoyle, and will air on Daily Mail TV Monday and Tuesday.
"The other problem is that for the people who are real victims of these things, when it is so obviously political in cases like this, it really diminishes the real claims," Trump, who’s in the midst of a divorce, said.
The interview took place while the couple was in Montana campaigning for Republican Senate candidate Matt Rosendale.
The Daily Mail did not specify the exact date of the interview but Guilfoyle appears to be wearing the same dress she wore at an event for Rosendale last Tuesday, two days before Kavanaugh and accuser Christine Blasey Ford testified before the Senate Judiciary Committee.
In the clip, Guilfoyle does not specifically name Kavanaugh or Ford but seems to reference the case, saying she thinks "it's important in terms of doing an investigation to get the facts out there."
"It's very tough 35 years later but it doesn't mean it should be ignored. But people need to be careful to understand the politics involved, as well, and what motivations people may have," she said, appearing to reference Ford's allegations that Kavanaugh sexually assaulted her when they were in high school in 1982.
Kavanaugh has vehemently denied the accusation.
Copyright © 2018, ABC Radio. All rights reserved.