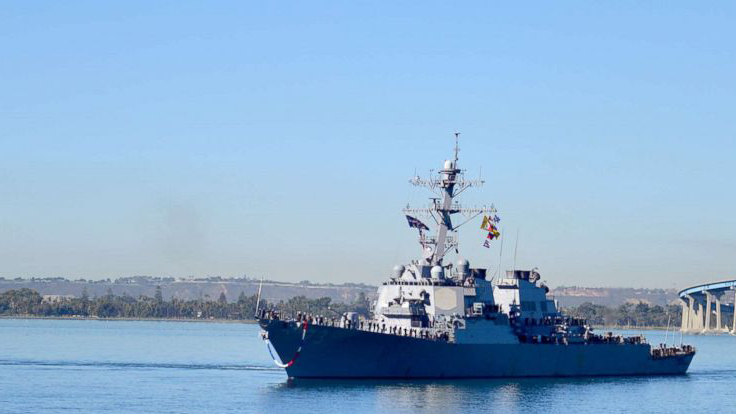 Seaman Trenton Kotlartz/US Navy(WASHINGTON) — The U.S. Navy destroyer USS Decatur had to maneuver to avoid a collision on Sunday after a Chinese warship came within 45 yards of its bow as the American ship transited a disputed island chain in the South China Sea on Sunday, U.S. defense officials said.
The close encounter that the U.S. Navy characterized as "unsafe and unprofessional" comes at a time of heightened tensions between the United States and China.
"At approximately 0830 local time on September 30, a PRC LUYANG destroyer approached USS DECATUR in an unsafe and unprofessional maneuver in the vicinity of Gaven Reef in the South China Sea," said Capt. Charlie Brown, a U.S. Pacific Fleet Spokesman.
Gaven Reef is located in the Spratly Islands chain in the South China Sea where China claims seven man-made islands as its own.
The close encounter with the Chinese warship occurred as the American destroyer was carrying out a freedom of navigation operation (FONOPs) in the Spratlys, the U.S. said.
The U.S. Navy routinely undertakes FONOP missions worldwide to challenge excessive territorial claims of international shipping lanes.
USS Decatur had sailed within 12 nautical miles of Gaven and Johnson Reefs in the Spratly Islands when it was approached by the Chinese destroyer.
The Chinese Navy "destroyer conducted a series of increasingly aggressive maneuvers accompanied by warnings for DECATUR to depart the area," Brown added.
"The PRC destroyer approached within 45 yards of DECATUR's bow, after which DECATUR maneuvered to prevent a collision," said Brown.
A U.S. defense official characterized the close encounter as having been of short duration.
Chinese vessels have approached U.S. Navy ships during previous FONOPs in the South China Sea, but Sunday's encounter appears to the be the closest one yet.
"U.S. Navy ships and aircraft operate throughout the Indo-Pacific routinely, including in the South China Sea," said Brown. "As we have for decades, our forces will continue to fly, sail and operate anywhere international law allows."
There was no immediate comments from China.
Over the last week, the U.S. and Chinese military relationship has deteriorated as both countries are engaged in a bitter trade dispute.
Last week, a U.S. Air Force B-52 flew a mission through the East China Sea and two other B-52 flights were carried out through the South China Sea.
Also last week, China refused a port of call in Hong Kong to the U.S. Navy ship USS Wasp slated for October and pulled a top admiral from a scheduled meeting with his U.S. Navy counterpart.
On Monday, a U.S. official confirmed that Defense Secretary Jim Mattis had canceled a planned trip to China in October after China had downgraded the level of officials he was to meet.