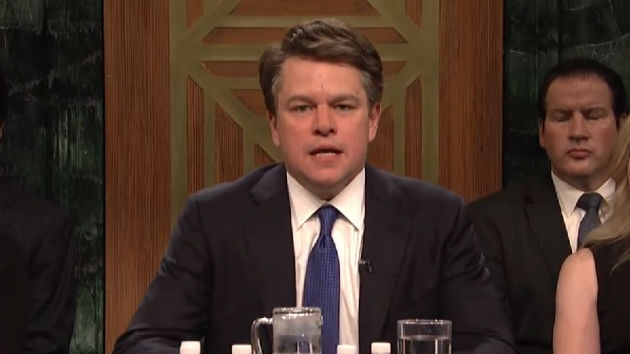 NBC/Will Heath(NEW YORK) — Matt Damon was the latest A-lister to join Saturday Night Live as he guest starred as an angry Brett Kavanaugh in the season premiere's cold open.

Damon emerged to cheers from the crowd as he took his seat at the table and was asked if he was ready to start.

He did take it to 15 "real quick" as he shouted about the conspiracy attacking him and guzzled water like beer.

"I'm here tonight because of a sham, a political con job orchestrated by the Clintons, George Soros — Kathy Griffin!"

The crowd groaned as Damon's Kavanaugh uttered the line, "I'm not backing down b******, I don't know the meaning of the word stop.'"

SNL alum Rachel Dratch made a cameo as Senator Amy Klobuchar, who Kavanaugh confronted at the hearing Thursday, responding to a question about whether he'd blacked out with "Have you?"

Current castmember Aidy Bryant played prosecutor Rachel Mitchell and was constantly cut off by the committee.

Damon's Kavanaugh shotgunned a beer and offered one final warning:

"If you think I'm angry now, just wait until I get on the Supreme Court, because then you're all gonna pay."

Milli Vanilli biopic dropped by film company, controversial director Brett Ratner may be the reason why
“I didn’t have a problem with the way we were doing it” — ‘Simpsons’ creator Matt Groening responds to racial casting flap
Daniel Kaluuya says he “wasn’t invited” to the world premiere of ‘Get Out’
Matt James breaks silence on ‘Bachelor’ controversy: “It has been devastating and heartbreaking”
Ken Jennings honors Alex Trebek as he wraps ‘Jeopardy!’ guest hosting gig
‘SNL’ open tackles Britney Spears, Ted Cruz and Gina Carano controversies