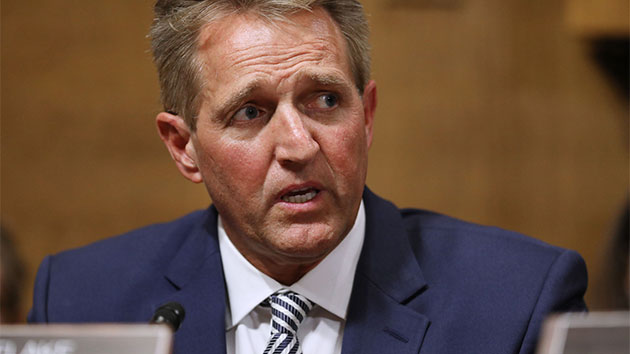 Chip Somodevilla/Getty Images(WASHINGTON) — Senators Chris Coons and Jeff Flake described in a "60 Minutes" interview how their bipartisanship led to an FBI investigation into Christine Blasey Ford's allegations against Brett Kavanaugh.

Coons, the Democrat from Delaware, called his friend and colleague across the aisle, Flake of Arizona, a "hero" for being the Republican who ultimately forced President Donald Trump's hand in ordering a week-long, supplemental investigation into his Supreme Court nominee.

In unpacking the testimony Thursday, both Coons and Flake agreed that Kavanaugh became "too sharp," as Flake put it, with senators on the committee.

Coons said it "went over a line."

"He had exchanges with Senator Feinstein, with Senator Klobuchar, with others, that I thought went over a line. He was clearly belligerent — aggressive, angry," Coons said in the interview with CBS' Scott Pelley.

The senators also agreed that Kavanaugh's attacks on the left — specifically accusing the Clintons of involvement — seemed "partisan" beyond the standards of a judicial nominee.

"There were some lines that he delivered that were sharper, more partisan, more 'this is the Clinton’s paying me back. This is a democratic smear campaign,' that I was surprised –- struck — to hear from a judicial nominee," Coons said. "In my case, yes, it made me wonder about his suitability to serve on the bench."

Flake, though he agreed, told Pelley that there were also parts of Kavanaugh's testimony with which he identified.

"Well, the part that he talks about, the mention of the Clintons and whatnot, I didn’t like either. It seemed partisan. But boy, I had to put myself in that spot … I think you give a little leeway there," he said.

Flake emphasized that Kavanaugh's anger was "in keeping with someone who had been unjustly accused."

"I heard someone who I hope I would sound like, if I had been unjustly accused," Flake said.

But he, too, denounced the judge's comments flipping questions back on senators about alcohol abuse and high school antics.

As it went on, Flake said, "[Kavanaugh's] interaction with some of the members was a little too sharp, and he actually apologized at one point."

Ford and Kavanaugh both testified before the committee Thursday in an hours-long questioning that was watched across the world. The next day, as the committee was set to vote, Flake — who had committed to voting for Kavanaugh — was confronted by two protestors who said they, too, had been sexually assaulted in the past.

After Coons finished speaking before the Senate Judiciary Committee that afternoon, he and Flake started a discussion that led to the whole committee crammed into a tiny hallway, the anteroom behind the Senate hearing room, which the senators described in the interview.

They eventually huddled into an even smaller phone booth, where Flake and Coons alone went over the details of stipulating a week-long investigation that might quell the nation in a deeply divided time.

"Eventually, we literally had the whole, the whole committee crammed into this tiny, little hallway and my recollection was Jeff, at one point says, 'OK I want to talk to Chris.' And we went into literally a phone booth that we can barely fit in, talking to another senator and there's this whole committee right outside," Coons said, laughing.

"Looking in," Flake added, "it was quite a moment."

Flake, who's not running for re-election, said there's "not a chance" he would've worked across the aisle with Coons if he planned on staying in the Senate.

"There’s no value to reaching across the aisle. There’s no currency for that anymore. There’s no incentive," said Flake, who's been a frequent critic of the hyper-partisanship in Washington, often directly attributing it to the president's rhetoric.

Pelley asked both senators what they expect to see at the end of the week-long investigation.

"What are the chances that we are going to be in exactly the same place a week from now?" he asked.

"There’s a chance and we knew that," Flake said.

Colleagues suggested that it could only make matters worse, Flake said — an "outrageous allegation" could come forward or the FBI could talk to people "who don’t want to talk anymore."

"There is a chance that that will happen. I do think that we can make progress," Flake said.

Coons remained positive that the investigation will result in some healing for survivors of sexual assault.

"I think we will be in a different place. Because lots of survivors around the country will feel that Dr. Ford’s story was heard and respected and further investigated," he said.

He also acknowledged that the investigation could exonerate Kavanaugh of the accusations.

"We may well be in a different place a week from now because Judge Kavanaugh and his family may well have had exculpatory evidence brought forward," he said.

Pelley asked both senators if, on the other hand, Kavanaugh's nomination will be derailed if the investigation shows otherwise, finding evidence that he lied to the committee.

"Oh, yes. I would think so," both senators said.