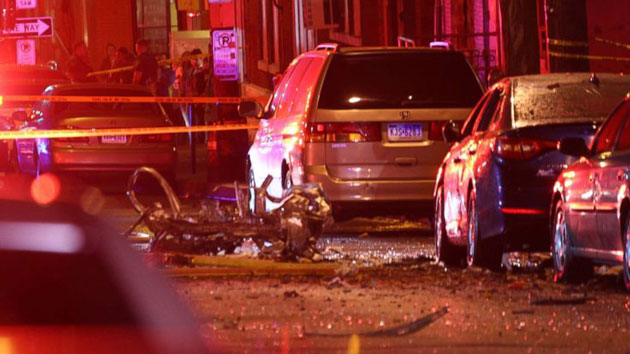 Rich Rolen via ABCNews.com
Posted on September 30, 2018 by ABC News

Rich Rolen via ABCNews.com(ALLENTOWN, Pa.) — A car explosion late Saturday in Allentown, Pennsylvania, has killed at least one person.
The Allentown Police Department confirmed one person died in the blast that took place at about 9:30 p.m. There is no word on any further injuries.
Photos of the scene showed debris from the car strewn across the block.
Philadelphia ABC station WPVI reported the blast shook windows of houses in the neighborhood.
It is not clear how or why the explosion happened.
The FBI and Bureau of Alcohol, Tobacco, Firearms and Explosives (ATF) are both on scene investigating the incident.
"FBI personnel have responded to the scene of an explosion in Allentown," the agency said in a statement on Twitter. "We are working with our law enforcement partners to assess the situation & determine the cause, with public safety the Bureau's highest priority.
"Anyone who witnessed or has information on the blast who has not yet spoken with investigators is asked to contact us as soon as possible at 215-418-4000 or https://tips.fbi.gov," it continued.
The Red Cross also tweeted it had set up a temporary shelter in the area. The area surrounding the explosion has been cordoned off by authorities for blocks.
"The Red Cross has a temporary shelter open at Cleveland Elementary School, 424 N. 9th St., Allentown, for anyone displaced by the ongoing police incident from Saturday evening," the tweet said.
Allentown is located in eastern Pennsylvania, about 60 miles northwest of Philadelphia.
Copyright © 2018, ABC Radio. All rights reserved.