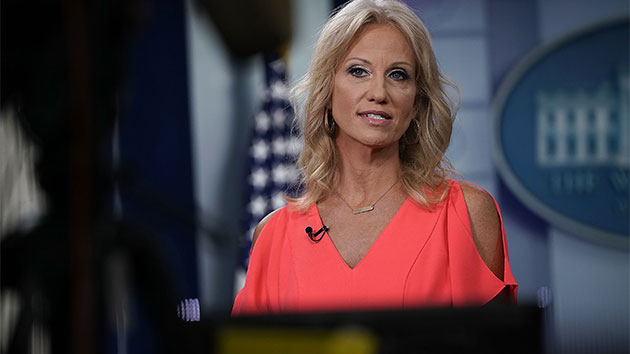 Alex Wong/Getty Images(WASHINGTON) — Counselor to the president Kellyanne Conway said on live television Sunday that she is a victim of sexual assault.

The White House advisor was on CNN's “State of the Union” to discuss the Kavanaugh hearings and FBI investigation into allegations against Kavanaugh with Jake Tapper.

"I feel very empathetic, frankly, for victims of sexual assault and sexual harassment and rape," she said.

Conway then stopped for a moment, looked down, and cleared her throat.

"I'm a victim of sexual assault. I don't expect Judge Kavanaugh or Jake Tapper or Jeff Flake or anybody to be held responsible for that. You have to be responsible for your own conduct,” she said.

Conway continued, "This is not Bill Cosby. Those — those comparisons on your network are a disgrace, and the anchor should have called them out. This is not even Bill Clinton. You have — you have Senate Judiciary Committee members who refused to remove Bill Clinton from office after he received oral sex in the Oval Office and lied about it to a grand jury as president of the United States."

"The hypocrisy is ridiculous. And if not one Senate Judiciary Committee member changes his or her vote because of what they learn from the FBI investigation, that tells you all you need to know about what the president and Judge Kavanaugh has said is a sham," Conway said.

"This is all partisan politics. All women can't — you know, I want those women who — who were sexually assaulted the other day who were confronting Jeff Flake, God bless them," Conway said. "But go blame the perpetrator."

Jake Tapper, who was startled by the on-air revelation, apologized for Conway suffering that experience.

"This is the first time I have ever heard you talk about something personal like that. And I'm really sorry," Tapper said.

Conway added that she doesn't want her story to be conflated with the current allegations against Kavanaugh and she also vehemently pushed back on Tapper for saying that President Trump has been accused of sexual assault.

"Let's not always bring Trump into everything that happens in this universe," Conway said.

President Trump has been accused of sexual harassment or sexual assault by more than one dozen women, but has denied these claims. During his presidential campaign, Trump was caught on tape talking to Access Hollywood host Billy Bush saying that when he was “automatically attracted” to beautiful women. “I just start kissing them. It’s like a magnet. Just kiss. I don’t even wait. And when you’re a star, they let you do it. You can do anything…Grab ‘em by the p—-,” said Trump.

Conway, formerly Trump’s campaign manager, went on to say that she thinks victims and perpetrators of sexual assault are treated differently based on their gender or politics, and that victims like Dr. Ford should be heard in a court of law.

"But we do treat people differently who are either the victims or the perpetrators of this based on their politics now and based on their gender. That is a huge mistake."

ABC News reached out to Kellyanne Conway, but she did not immediately return a request for comment.