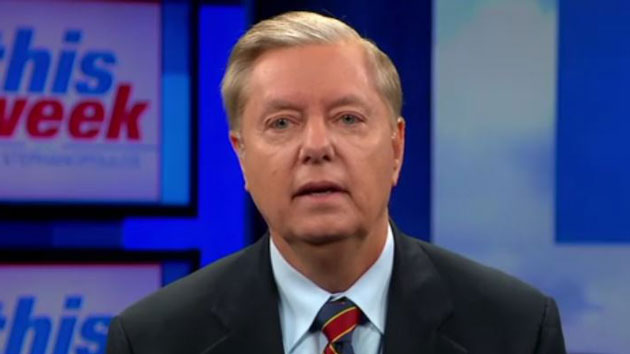 ABC News(WASHINGTON) — Republican Sen. Lindsey Graham suggested that there is no need for the FBI's supplemental investigation of Brett Kavanaugh to include talking to his former classmates about his drinking habits in college.
Graham, a member of the Senate Judiciary Committee and staunch supporter of Kavanaugh's nomination to the Supreme Court, told ABC News Chief Anchor George Stephanopoulos on "This Week" Sunday that the FBI probe would include talking to Christine Blasey Ford, who has accused Kavanaugh of sexual assault when they were teens; Deborah Ramirez, who alleges he exposed himself to her in college; and Mark Judge, a high school friend of Kavanaugh's.
Graham also said the FBI would talk to people whom Ford said were "witnesses," an apparent reference to people she said were at the small party where she was allegedly assaulted.
Kavanaugh has strongly and categorically denied the allegations of sexual misconduct and assault.
Stephanopoulos said, "It appears that the FBI will not be questioning those college witnesses who contradict Brett Kavanaugh's testimony about his drinking … Isn't that relevant?"
Graham said, "No, I think you're trying to portray him as a stumbling, bumbling drunk, gang rapist, who during high school and college was Bill Cosby."

Vivek Murthy to talk about his own family lost to the pandemic in nomination hearing
Rush Limbaugh, controversial conservative talk show host, has died
Mandy Moore says she was shut out of an interview because she refused to talk about her abuser
FBI arrests two ‘Boogaloo Bois’-associated militia members, one who incited riot
FBI agent Daniel Alfin mourned as ‘hero’ in funeral at Florida football stadium
Memorial service honors slain FBI agent, mom of 2: ‘True American hero’