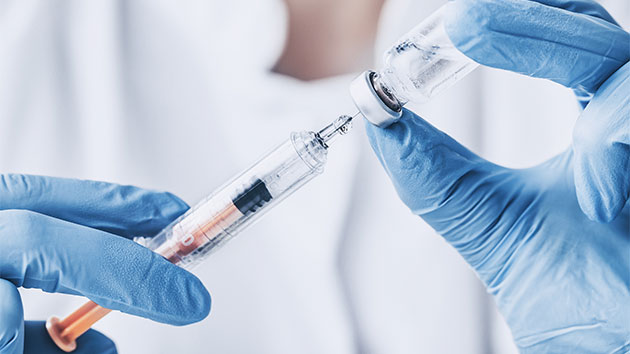 (NEW YORK) — It’s the start of fall, which means flu season is here.

Last year, flu hospitalizations were the highest they’ve ever been; 106 out of every 100,000 people were hospitalized for the flu in the 2017-18 season, with people over age 65 accounting for 58 percent of those hospitalizations and 180 pediatric deaths.

Flu and the common cold can both make you feel crummy, but they are caused by different viruses. Colds are usually milder and do not result in serious health problems associated with the flu, like pneumonia or hospitalizations.

Right now, being prepared is the best thing you can do before the season hits. Here’s what you need to know.

When does flu season start?

Flu season may start as early as October in North America, but generally, it begins sometime in the fall and ends in March. The flu virus, however, can be detected at any point throughout the year, which is important to know if you ever have symptoms, even in the summer. Experts can’t really predict the severity of each flu season, as different strains of the virus can have different impacts on timing and length of the season.

Should I get the flu shot? When?

Yes. With few exceptions, the Centers for Disease Control and Prevention recommends everyone 6 months of age and older to get vaccinated every year. It is the first line of defense in treating the flu. Although people who are moderately or severely ill should wait to recover before getting the shot. Only people with severe, life-threatening allergies to the vaccine or any of its ingredients should avoid the shot. According to the CDC, anyone who is between 2 and 50 years old should get either the shot or the nasal spray. The American Academy of Pediatrics, however, says the flu shot is the preferred choice over the nasal spray for children

You can get vaccinated at any time as fall approaches, but October is probably the best time to get it done. The CDC recommends that everyone get vaccinated by the end of October, which gives your body the roughly two-week period it needs to develop an immune response to the vaccine prior to the start of peak flu season. If you miss this deadline, however, the vaccine can still offer some benefit. So it's important to get it as long as people are still getting sick.

What if I’m pregnant?

It is highly recommended that all pregnant women get the flu shot. The body changes during pregnancy — heart rate and oxygen consumption increase while lung capacity decreases. That means if a mother-to-be gets the flu, they are more susceptible to life-threatening complications than the general population. So all women who are or expect to be pregnant should get the flu vaccine. This is all the more important considering a recent CDC survey showed that only half of pregnant women get the vaccine.

I heard the flu shot makes you sick. Is that true?

No. The flu vaccine contains an inactivated virus, which means that the virus contained in the vaccine can’t actually infect you. It does take one to two weeks for your immune system to protect you from the flu. So, if someone becomes sick after their shot, it is most likely because their body wasn’t protected from the flu yet, not from the vaccine itself.

Similarly, there are sometimes mismatches between the virus strain someone gets sick with and the strains used to make the vaccine. In these cases, the vaccine might be imperfect at fighting all strains of the flu that might exist, but it's still the best defense we have.

How do I know if I have the flu?

Flu symptoms often come suddenly, and can vary significantly depending on the person. These include fever, cough, sore throat, nasal congestion, body aches, headaches, and fatigue. While the flu may seem similar to a common cold, colds are usually slower to develop, and less likely to result in fevers.

Some patients with severe infections may have symptoms — like difficulty breathing and confusion — that are cause for concern and might require immediate medical attention to treat them. Medical attention should also be sought for children with the flu who develop bluish skin, aren't waking up or aren't eating. In all cases, if the person's symptoms suddenly worsen after appearing to initially improve, a visit to a clinician is warranted.

I think I have the flu. What do I do next?

In most cases, if symptoms are mild, staying home and leaving only to get medical care is the best course of action. If you must leave the house, wear a face mask, wash your hands, and cover coughs and sneezes with your elbow.

People with severe symptoms, as well as people at high risk from the flu (young children, people 65 and older and pregnant women), should contact their doctors if they develop symptoms. In some cases, people may get antiviral medications, which can lessen symptoms, shorten the time of illness and reduce complications.

How is the shot made?

Manufacturers have many methods of producing flu vaccines. The most common method is the egg-based vaccine, where strains of the virus are injected into eggs and incubated for several days. They are then weakened or killed and afterward purified to be used in a shot or nasal spray.

The next method is through cell-based technology. In these vaccines, the eggs used to incubate the virus are replaced with animal cells. This method is faster in producing vaccines than the older egg-based method.

Another method uses recombinant technology. In these cases, a certain gene is taken from the flu virus, to be inserted into a different non-flu virus which grows in insect cells. This genetically altered non-flu virus then replicates in insect cells. After the virus has been replicated, manufacturers purify the protein produced from the flu gene, which is used in the vaccine. The advantage of this method is that it doesn't use eggs, so people with severe egg allergies can be vaccinated.

For all these methods, the FDA must test and approve the vaccines prior to their release to the public.

What are the side effects of the flu shot?

Most side effects are mild and resolve quickly on their own. Soreness in the area of the shot is pretty common. In addition, people may have headaches, fevers and nausea. Seek immediate symptoms if someone is showing signs of a severe allergic reaction, such as difficulty breathing, hoarseness or eye and lip swelling.

Where should I get the flu shot?

Grocery stores, pharmacies, doctor’s offices, and hospitals are all offering flu shots. Experts say it doesn’t matter where you get it, as long as you get it.

Flu season is here. Preventing its spread requires good hygiene and high vaccination rates. If you are experiencing any symptoms, avoid contact with other people. If symptoms are starting to get severe, contact your doctor. Working together will be critical in halting flu season.

Dr. Jonathan Steinman is a physician in radiology and writer with the ABC News Medical Unit.