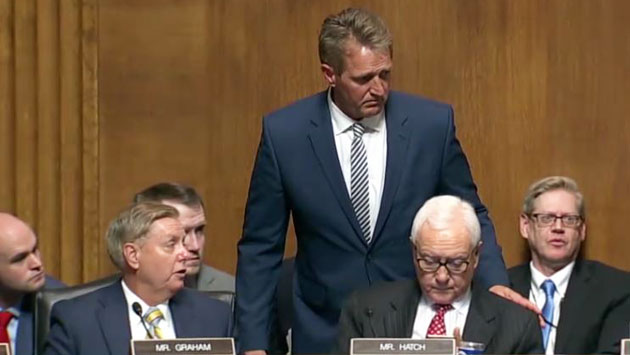 ABC News(BOSTON) — An event in Boston featuring Sen. Jeff Flake is being moved due to security concerns, according to its host.
Flake, R-Ariz., was scheduled to appear Monday at Forbes' "Under 30" Summit in Boston, where he was to participate in a panel discussion called "The Future of the Republican Party" with Ohio Gov. John Kasich.
The summit was to be hosted at Emerson College's Colonial Theatre.
Matthew Hutchison, senior vice president, corporate communications, for Forbes Media, told Boston ABC affiliate WCVB pending ongoing scheduling, they are in the process of moving the discussion with Flake to a larger and more secure location, possibly the Under 30 Village at City Hall Plaza.
The decision to move the panel was made after Emerson decided it could not secure the theater.
"We are seeking to exercise our rights as the owners of the Colonial to have the panel canceled for security reasons," Emerson College President Lee Pelton said in a statement to WCVB.
Hutchison said a new location and time has not yet been officially set.
The "Under 30" summit is a four-day event beginning Sunday and running through Oct. 3. Other attendees include Celtics guard Kyrie Irving, FEED Projects CEO Lauren Bush Lauren and a food festival with guests such as Sweetgreen cofounder Nicolas Jammet.
Flake thrust himself into the national spotlight on Friday when he forced the delay of a Senate Judiciary Committee vote to recommend Supreme Court nominee Brett Kavanaugh. After a confrontation with protesters, Flake convinced fellow undecided senators, such as Lisa Murkowski, R-Alaska, Susan Collins, R-Maine, and Joe Manchin, D-W.Va., to ask the president to open a weeklong FBI investigation into sexual assault claims made against Kavanaugh.
The senator cancelled an appearance at the Texas Tribune Festival on Saturday, however, Flake did make an appearance at the Global Citizen Festival in New York's Central Park on Saturday.
Copyright © 2018, ABC Radio. All rights reserved.