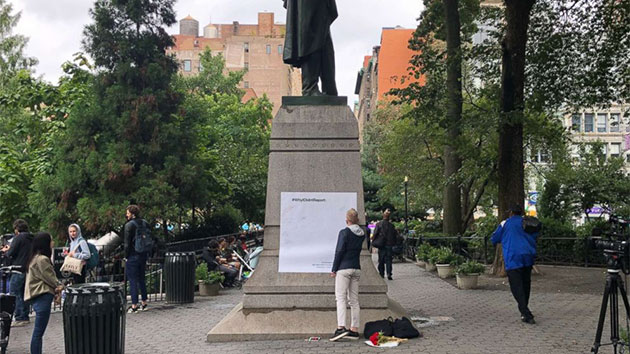 The back-to-the-future project — which allows people to get off their phones and share stories of sexual assault on sheets of white paper — started off as a class project for students at the School of Visual Arts.

Ha Jung Song, 25, and Bowook Yoon, 26, were instructed to create something they cared about deeply for an advertising portfolio class.

“I asked a lot of questions: What are your reasons? What is your emotional connection? Making sure it came from an authentic process and not for fame,” Shim told ABC News.

The students told ABC News they were inspired by sexual assault survivors who were posting their experiences in wake of the Brett Kavanaugh allegations.

Christine Blasey Ford says the Supreme Court nominee sexually assaulted her in the 1980s while at a party. Two other women have also come forward with allegations against Kavanaugh.

The hearing on Thursday included testimonies from Ford, who detailed her allegations for the Senate Judiciary Committee, and Kavanaugh, who angrily denied them.

The White House and Senate Republicans agreed to a one-week delay after President Trump ordered an FBI investigation.

President Trump, who nominated Kavanaugh, has steadfastly defended him.

Last week, the president, after initially not criticizing Ford, questioned why she didn't report the crime when it happened.

"I have no doubt, if the attack on Dr. Ford was as bad as she says, charges would have been immediately filed with local law enforcement authorities by either her or her loving parents,” he tweeted.

Yoon said it was that tweet that gave her a sense of urgency to speak up.

“We saw Donald Trump’s tweet blaming sexual assault victims and other people are retweeting that and made the #WhyIDidntReport," Yoon said. "They’re sharing their experience and we thought we could make a simpler template where people could speak up about this problem.”

“We recently found out many victims of sexual assault didn’t report it for all different reasons that are equally valid,” Ha Jung Song told ABC News.

More than 1,000 fliers have been posted around New York's busiest, most high-profile subway stations, including Times Square, Herald Square and Union Square.

At the Union Square station, one person wrote: "He was popular, plus well loved, so I didn't think anyone would believe me."

Beyond the old-school pen and paper format, the students provide a forum online, too. They created an Instagram account — @whyididntreportit — and have received hundreds of reactions, including personal notes, photos and words of support, they said.

“We didn’t expect people would react this much. We just wanted to let people know about this movement,” Yoon told ABC News.

Pictures on their Instagram account, which has more than 1,000 followers, included a note from a woman who says she was a sexual assault survivor. She lives more than 700 miles away in Georgia.

“He was an ex and I was drunk. I knew no one would believe me. I could barely walk to my car, so I called the one person I thought I could trust. I was betrayed in the worst possible way,” Tiffany Howerton, 26, shared with their Instagram page @whyididntreportit.

“I used my notepad on my phone, I took a screenshot, and posted it as a picture on my Instagram," Howerton told ABC News. "The page reached out to me and thanked me for sharing my story.”

The students are creating larger posters and taking their project to other parts of Manhattan, including Lincoln Center and Union Square Park.

The posters are for anyone who wants to engage, they said.

“It’s not your fault. You are so brave,” reads one of the posters.

The students want to provide as many platforms as possible for people to open up about what they've endured.

“We think it’s very important to give them a place where they can share their stories and get support,” Yoon told ABC News.