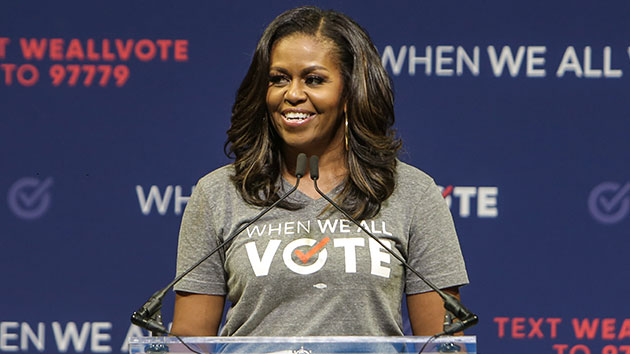 Thaddaeus McAdams/FilmMagic(CORAL GABLES, Fla.) — Michelle Obama walked onstage to a rock star's welcome in the final stop of her "When We All Vote" campaign — a nonpartisan effort to encourage voting in this year's midterm election.
The former first lady kept her comments at the University of Miami in Coral Gables, Florida, free from the controversy swirling in Washington, D.C., though she did urge young voters to turn out in large numbers in order to avoid politics "that don't reflect our values."
Obama spoke of the "dangerous cycle" the country is currently stuck in.
"I am here because it feels like we are locked in a dangerous cycle when it comes to voting in this country — a cycle that goes something like this: We tune out of politics frustrated that it doesn't reflect our values," Obama said. "Then election season comes along and millions of dollars are spent bombarding us with political ads, telling us why this particular race is so important and how this particular candidate has all the answers we've been looking for. Then a bunch of athletes and celebrities and famous people — like me — travel all across the country telling people how crucial it is to get registered and to vote."
"And after all that — all that effort, money, time and energy — for a whole host of reasons, some say they're too busy, some too cynical, some too disconnected, whatever the reason — only a fraction of the population actually bothers to vote," she continued. "Then time passes. And sooner or later, we're right back where we started, with folks tuned out, frustrated that our politics don't reflect our values, and we repeat that cycle again and again and again. So is there any wonder why we're so frustrated and tuned out of our politics? When a huge chunk of the populations sits out of the process, why are we surprised when our politics don't reflect our values?"
Obama came onstage at the Watsco Center to a dramatic introduction and screaming fans, which numbered over 4,500, according to the organizers. The crowd was more fitting of a concert by Kelly Rowland or Faith Hill, two of the other celebrities in attendance at the rally.
"Well, hello Miami. Oh, my goodness. Well, I'm happy to be here. Are you all happy to be here?" she asked.
The former first lady appealed to young voters by saying they wouldn't even trust another person to post on their Instagram feed. So why give another person your vote by not showing up?
"You wouldn't give your crazy uncle the power to post a picture to your Instagram feed, so why would you give a stranger the power to make far more important decisions in your life?" she joked.
Some of those in attendance were students at Marjory Stoneman Douglas High School, in nearby Parkland, Florida, where a shooting on Feb. 14 claimed the lives of 17 students and faculty. A group of students from the school, some of whom graduated in June, have pushed for an increased voter turnout, especially among young people, in order to effect change, particularly related to gun control.
"It's really important to get involved and to choose who your representatives are," Drew Schwartz, a Marjory Stoneman Douglas student at Obama's rally, told Miami ABC affiliate WPLG-TV.
Obama did not mention President Donald Trump or even either political party at Friday night's nonpartisan rally. Actors Keegan-Michael Key and Piper Perabo, musician Fat Joe and professional wrestler Titus O'Neill were among the other celebrities in attendance.
She made the first stop on her "When We All Vote" campaign in Las Vegas on Sunday. About 2,000 people attended that rally, where Obama said she was "sick of all the chaos and the nastiness of our politics."
In addition to the events attended by Obama, several smaller rallies were held during a "week of action" in Pittsburgh, featuring actor Tom Hanks; Atlanta, singer Janelle Monae; Detroit, Key and Loni Love; and Los Angeles, TV producer Shonda Rhimes.
The stop in Miami was the last for Obama, but she's about to embark on a different tour for the release of her memoir, Becoming. She will speak to Good Morning America host Robin Roberts in an exclusive prime-time interview on Nov. 12, the night before the book's release, and the following morning on Good Morning America. She then embarks on a 10-city, 12-stop book tour, filling arenas from Chicago to Denver. Brooklyn's Barclays Center and Washington, D.C.'s Capital One Arena will each get two events.
Copyright © 2018, ABC Radio. All rights reserved.