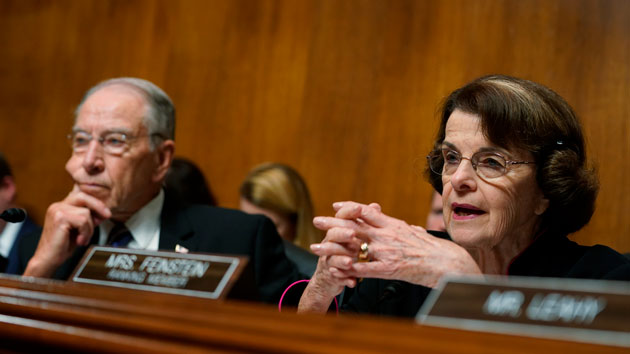 Andrew Harnik-Pool/Getty Images(WASHINGTON) — The fiery testimony from Brett Kavanaugh on Thursday has drawn rebukes from members of the Senate Judiciary Committee, with some saying his temperament shows he's unfit to serve on the nation's highest court.
Sen. Dianne Feinstein, the committee's ranking member, said she has not seen a judicial nominee behave in that manner before.
"This was not someone who reflected an impartial temperament or the fairness and even handedness one would see in a judge. This was someone who was aggressive and belligerent. I have never seen someone who wants to be elevated to the highest court in our country behave in that manner," Feinstein said.
Kavanaugh's combative appearance alternated at times between a loud defiance and defense of his character to emotional and tearful.
Feinstein, D-Calif., said one of Kavanaugh's accusers, Christine Blasey Ford, who alleges that he sexually assaulted her in high school, behaved very differently.
"In stark contrast, the person who testified yesterday and demonstrated a balanced temperament was Dr. Ford," Feinstein said, adding that she gave "powerful testimony."
Fellow Democrat Sen. Patrick Leahy echoed those concerns about Kavanaugh's behavior, saying that he has "never seen such volatility, partisanship and lack of judicial temperament" in a nominee.
Republicans on the committee, however, fiercely defended Kavanaugh's testimony.
Sen. Orrin Hatch, R-Utah, said Kavanaugh has an "impeccable" character and it would be an "absolute crying shame if we treated him like some sort of impostor."
Sen. Lindsey Graham, R-S.C., continued his impassioned defense of Kavanaugh that was on display during the hearing on Thursday.
"I'm going to vote yes, and I'm going to tell his two daughters that I'm proud of your dad, and I really, really believe he's a good man," Graham said.
Even Kavanaugh caught himself behaving questionably – and subsequently apologized for – during a tense moment with Sen. Amy Klobuchar of Minnesota.
When asked whether he had ever blacked out while drinking, Kavanaugh turned the question back on Klobuchar. After a brief recess, Kavanaugh apologized.
"I started my last colloquy to saying to Senator Klobuchar how much I respected her and what she did at the last hearing and asked me a question at the end and I responded by asking her a question and I'm sorry I did. This is a tough process," Kavanaugh said.
Copyright © 2018, ABC Radio. All rights reserved.

Biden will not have to cater to my agenda: Sen. Joe Manchin
A bipartisan coronavirus relief bill would be easier to pass: GOP Sen. Rob Portman
Milli Vanilli biopic dropped by film company, controversial director Brett Ratner may be the reason why
Sen. Ted Cruz responds to media reports of flying to Cancun amid brutal Texas weather, said he wanted to be ‘good dad’
Former Sen. Bob Dole announces he has stage 4 lung cancer
GOP Sen. Richard Burr censured by state party after voting to convict Trump