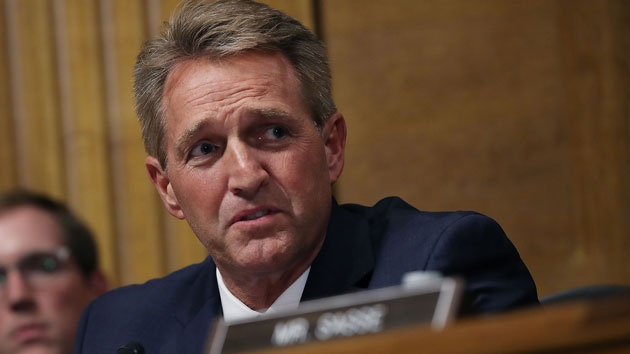 Win McNamee/Getty Images(WASHINGTON) — Protesters cornered the Republican senator seen as the possible swing vote on Brett Kavanaugh's Supreme Court nomination after he announced his support for the judge.
The decision by outgoing Sen. Jeff Flake from Arizona comes a day after Kavanaugh testified before the committee, as did Christine Blasey Ford, who alleges that Kavanaugh sexually assaulted her in high school.
Flake was confronted in an elevator Friday moments after his pending 'yes' vote was announced.
"What you are doing is allowing someone who actually violating a woman to sit on the Supreme Court. This is not tolerable," the unidentified woman said while talking to Flake in an elevator.
"Look at me and tell me that it doesn't matter what happened to me," the woman said.
Flake repeatedly, quietly thanked the woman but did not directly address her questions.
"No, I need to go to the hearing. I issued a statement. There have been a lot of questions here and I don't want to answer them," he said.
The confrontation came after Flake's office released a statement explaining his thinking.
"Yesterday, we heard compelling testimony from Dr. Ford, as well as a persuasive response from Judge Kavanaugh,” Flake said in a statement Friday. “I wish that I could express the confidence that some of my colleagues have conveyed about what either did or did not happen in the early 1980s, but I left the hearing yesterday with as much doubt as certainty.
"What I do know is that our system of justice affords a presumption of innocence to the accused, absent corroborating evidence. That is what binds us to the rule of law. While some may argue that a different standard should apply regarding the Senate’s advice and consent responsibilities, I believe that the constitution’s provisions of fairness and due process apply here as well," he said in the statement.
"I will vote to confirm Judge Kavanaugh.”
When Flake briefly spoke during Kavanaugh's questioning before the committee Thursday, which happened hours after Christine Blasey Ford testified about how she alleges that Kavanaugh sexually assaulted her in high school, he indicated that he was grappling with the decision.
"I would just urge my colleagues to recognize that in the end we are 21 very imperfect senators trying to do our best to provide advice and consent," Flake said.
"In the end, there is likely to be as much doubt as certainty going out of this room today. As we make decisions going forward, I hope that people will recognize that."