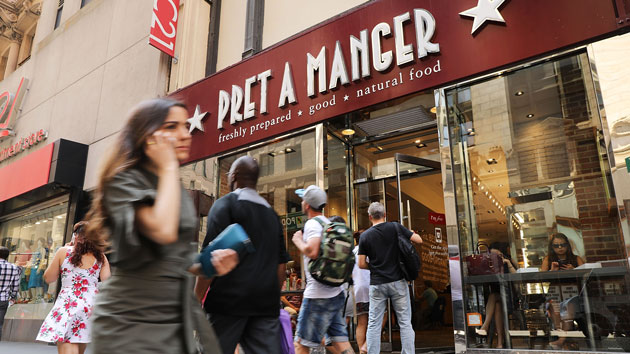 Spencer Platt/Getty Images(LONDON) — The CEO of Pret a Manger, a London-based sandwich chain, said his company will change its ways after a 15-year-old girl died from eating one of its baguettes.
The coroner for the inquest into the death of Natasha Ednan-Laperouse determined that Pret a Manger’s allergy labeling was inadequate.
“Meaningful change to come from this tragedy,” CEO Clive Schlee told reporters. “We will ensure that it does.”
Earlier this week, the court was told that Natasha broke out in hives “like a jelly sting” soon after boarding a British Airways flight from Heathrow Airport on July 17, 2016. Natasha, who was allergic to sesame, had eaten a Pret a Manger baguette containing sesame seeds, unknown to her at the time.
Natasha died of “anaphylaxis as a result of ingesting hidden sesame in a Pret a Manger artichoke, olive and tapenade baguette,” the family's lawyer, Jill Paterson, said in a press conference after the hearing.
"Natasha said that she still couldn't breathe and desperately looked at me. She said, 'Daddy, help me, I can't breathe,'" her father, Nadim Ednan-Laperouse, testified.
Natasha suffered a cardiac arrest on board after two EpiPen injections Ednan-Laperouse administered failed to work. She died at a hospital in Nice, France, a few hours later.
“This has been an incredibly difficult week for us as a family but the process has, however, shed light on very very important issues that led to Natasha’s death,” Ednan-Laperouse said. “Our beloved daughter died in a tragedy that should never have happened and we believe that this inquest has shown that she died because of inadequate food labeling laws.”
Ednan-Laperouse expressed shock that Pret had ignored previous “serious allergic incidents involving sesame at Pret a Manger before our daughter had died. It feels to us that if Pret a Manger were following the law, then the law was playing Russian roulette with our daughter's life.”
Paterson, the family's lawyer, called on U.K. Environment Secretary Michael Gove to change the law around food packaging. She described the food chain’s procedures for recording and monitoring problems with food items as “inadequate and incoherent.”
Although sesame is one of 14 allergens that must be labeled according to EU regulations, current U.K. laws do not require freshly made, non-packaged food to be labeled individually for allergy information.