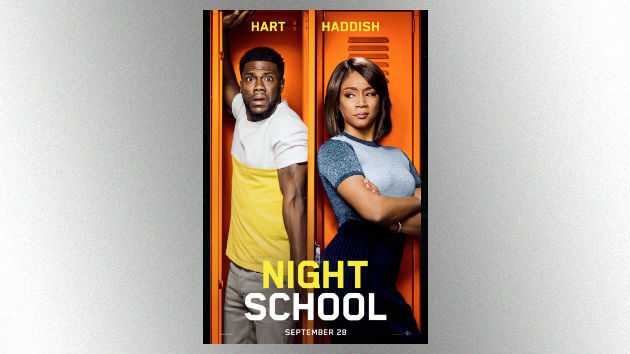 Universal Pictures(NEW YORK) — Girls Trip director Malcolm Lee and producer Will Packer are sharing details of how their new comedy, Night School, came about and why the upcoming film had a bit of a bumpy start.

Packer tells ABC Radio that the film — which follows Kevin Hart as a high school drop out returning to night school for his GED — was actually Hart's idea.

"He pitched this movie to me years ago," Packer says. "He's been wanting to get into producing. And so, this was his first time acting as a producer along with me, where movies were being released under our production banners."

Although Packer says Kevin pitched the idea prior to Girls Trip and Tiffany Haddish's meteoric success, the producer reveals that after giving Hart a sneak peek of the blockbuster, Hart immediately wanted to have Malcolm Lee and Haddish involved.

While Packer says the film was a "no brainer," for him, Lee disagrees.

"It was not a no brainer. I initially said no," Lee reveals. "I had been coming off a very busy 2016 which had been the busiest year of my career… I wanted to enjoy the roll out of Girls Trip… But, Will came to me like, 'Hey man I got the script. Kevin Hart. We like for you to do this.' So, I took a look and I was like, 'Ooo.'"

According to Lee, "the script wasn't great," and there was a lot of "work" to do. But after thinking about the "chance to work with Hart," and Universal Pictures again, he decided to sign on.

Night School is now out.