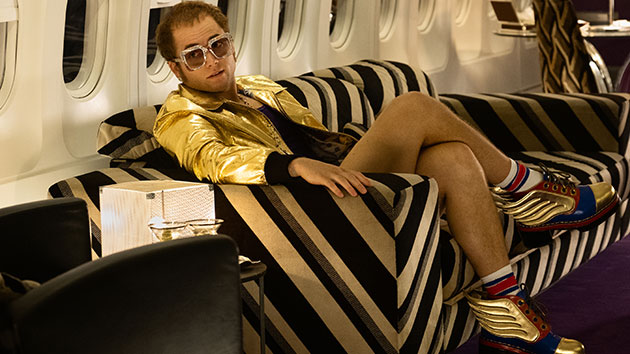 In the photo, we see Taron as Elton, lounging on a private jet. He's got Elton's receding hairline and huge sparkly glasses, as well as a gold satin jacket, shorts, and red and blue platform boots with gold wings on the ankles.

The studio describes the movie as "an epic musical fantasy about the uncensored human story of Sir Elton John’s breakthrough years."

Taron is doing all his own singing in the film and he's already proven he can do it: He belted out Elton's hit "I'm Still Standing" when he voiced Johnny, the teenage gorilla character in the hit animated musical Sing.

As previously reported, Rocketman also stars Jamie Bell, Bryce Dallas Howard and Richard Madden. Director Matthew Vaughn, who worked with both Taron and Elton in the Kingsman movies, is a producer.