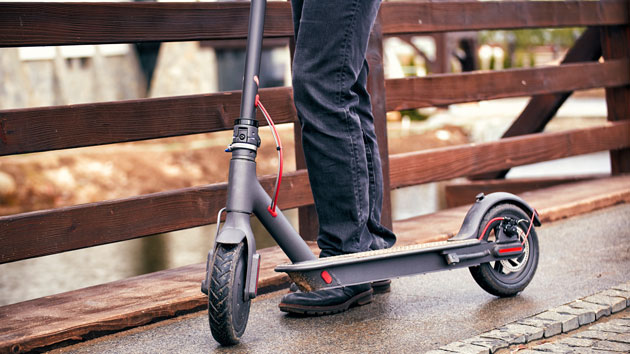 iStock/Thinkstock(SAN DIEGO, Calif.) — The growing trend of electric scooter rentals popping up in cities all over the world is giving rise to another phenomenon: serious injuries.
Now, citing concerns about a potential health care crisis, hospitals and trauma centers in California are taking it upon themselves to collect data about injuries that range from broken bones to internal bleeding and traumatic brain injuries among riders of all different ages, officials said.
Emergency rooms and trauma centers usually track the types of injuries themselves, not what caused them. But the consistent increase in visits attributed to electric scooters, which can go up to 15 miles per hour, has motivated doctors to collect their own data sets.
In California, concern over future safety is particularly acute because Gov. Jerry Brown signed a bill last week saying adults won’t need to wear helmets while riding scooters, although riders younger than 18 will.
Dockless electric scooter rentals have launched along the California coast, including in Santa Monica, San Francisco and San Diego, which is currently collecting data on electric scooter injuries. San Francisco banned scooters for several months before approving two companies to return for a pilot program starting Oct. 15, and a spokesperson for the San Francisco Municipal Transportation Agency said the city will start tracking injuries then.
There is no national data available regarding electric scooter accidents, according to the American Medical Association. The AMA recommends wearing a helmet, elbow and knee pads and closed-toed shoes for scooter riders.
Dr. Vishal Bansal is the medical director of trauma at Scripps Mercy Hospital San Diego. He said that the lack of helmet laws and increased scooter speeds are having a real impact.
"We might as well be ignoring everything we’ve learned about seat belts, everything we've learned about helmets, everything we've learned in public safety, everything we learned about concussions and brain injury, and simply ignore it and turn back the clock 50 years," Bansal told ABC News. "It's illogical and unconscionable."
As a result of the increasing number of trauma center visits, Bansal estimates Scripps Mercy has seen about 30 injuries in the past three to four months. He said he guessed that the entire downtown area would have seen about 60 to 80 such injuries, with patients ranging in age from teenagers to seniors, and many suffering blunt force head trauma. All six of the trauma centers in San Diego have started to collect data on injuries, he said.
Earlier this month, a 24-year-old man died after falling off a Lime scooter in Dallas, police said. The medical examiner’s office ruled that the cause of death was "blunt force injuries to the head."
Last week, a 20-year-old man died in Washington D.C.'s Dupont Circle area after being dragged by an SUV for 20 yards while riding a Lime scooter.
"Lime is committed to safety, which is why we are continuously upgrading and improving our products to ensure they are the safest and most reliable they can be," Lime spokeswoman Mary Caroline Pruitt wrote in an email. "For example, the scooter model that we just recently released in partnership with Segway was designed with safety top of mind. Our new scooter model has enhanced safety features including: a night-light on both the front and back of the scooter for better visibility, a new flashing light added below the deck, and an additional manual brake on the back wheel, so that there’s brakes on both the front and rear wheels."
"We are constantly developing and implementing tools in the app to further promote safe riding and scooter use, and will continue to see all the ways we can proactively educate riders on safe riding habits," Pruitt said.
"We support safe riding practices, and will always encourage riders to wear helmets through messaging in our app and on our scooters, helmet giveaways, and proactive education. All first-time Lime riders are required to complete an in-app tutorial that provides guidelines on helmet safety. We will continue to implement tools like this to further promote safe riding and scooter use. In addition, we work in partnership with cities to reinforce the need for everyone, whether they are Lime riders or not, to practice safe-riding at all times," Pruitt added.
In Los Angeles's beach enclave of Santa Monica, ER visits by scooter riders have increased along with the number of scooters in the area, said Dr. Wally Ghurabi, the medical director of the emergency room at UCLA Medical Center, Santa Monica. He estimates there were 60 scooter-related injuries in the ER in July, and "two or three a day since then," some with serious brain bleeding.
At nearby Providence Saint John's Health Center in Santa Monica, "We are seeing an estimated 15 to 20 patients a month with injuries acquired while operating electric scooters," Emergency Department Medical Director Dr. Russ Kino said. "This is concerning, as it includes patients with serious head injuries."
In San Francisco, where many of the scooter companies are headquartered, the city's only trauma center, Zuckerberg San Francisco, has begun tracking information but none is available yet.
"Our emergency room doctors have noticed an uptick in scooter-related injuries," a hospital spokesman said. "For all of our emergency doctors to have said something, it must have been pretty significant."